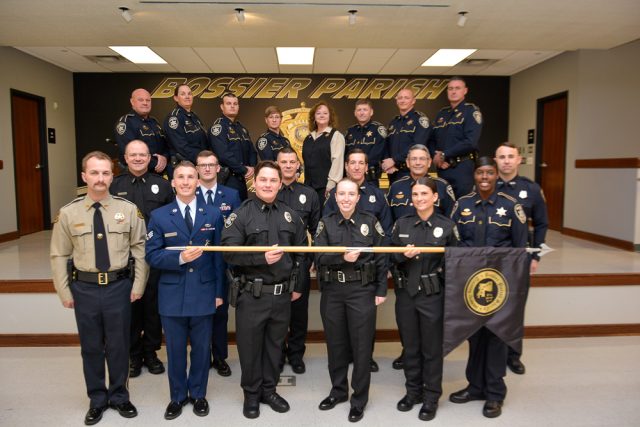 Bossier Sheriff Julian Whittington is pleased to announce that 12 law enforcement recruits graduated from the Bossier Parish Sheriff’s Training Academy (BPSTA) during a ceremony at the academy headquarters in Plain Dealing at 10:30 a.m. on Friday, November 18.

The 12 graduates of BPSTA Class 028 are from five different law enforcement agencies. The guest
speaker for the graduation was Mr. Alan Seabaugh, LA House of Representatives, District 5, who thanked the graduates for their commitment to public service.

Sheriff Whittington also had the honor of administering the Oath of Affirmation to deputy Markayla
Clark, who was initially hired as a correctional officer with the Bossier Sheriff’s Office.

The graduating class of BPSTA Class 028 is:

The Bossier Parish Sheriff’s Training Academy, formerly known as the North Louisiana Criminal
Justice Academy, held its first graduation in 2009. Over the past 13 years, instructors have trained more than 600 recruits to become POST-certified law enforcement officers.