It was 1974 when D.C. Machen, Jr. walked into a Bossier Parish classroom as a first time teacher.

He was hired at Plantation Park Elementary School to teach science and social studies.

Machen still remembers that first year vividly. He didn’t know it then, but that was just the starting point of his career.  After more than four decades with the Bossier Parish School System, Machen is retiring.

“It is bittersweet and it was a tough decision to make,” he said. “I have been blessed tremendously, more than I ever expected, understood or could even comprehend when I began this journey.”

Growing up, there was no one in his immediate family that worked in education. His father was in law enforcement and his mother was a registered nurse. Along with his three siblings, Machen said they were “your average middle class family.”

“I came from a good, Christian family,” he said. “My parents were married almost 50 years before my dad died. I had many good influences at home, but I was blessed to have teachers that connected with me.”

Machen attended Bossier Parish Schools growing up — Waller Elementary, Rusheon Middle School and Bossier High School. It was there that he found mentors and influential people who would all have a hand in shaping the person he is today.

Machen worked at Plantation Park Elementary until 1979 before taking a job at Rusheon Middle as a teacher and coach. He always hoped he would be an effective classroom teacher, one that took every opportunity to influence the students he came in contact with.
He found himself in an administrative role when he became the Assistant Principal at Greenacres Middle School in 1986. Next, he became the Principal of Airline High School in 1992.

In 2000, Machen became the Assistant Superintendent under Ken Kruithof. Nine years later he was named Bossier Schools’ Superintendent. Being the superintendent, though, was not something he originally set out to do, but it was something he worked hard to become. In order to be an effective leader, Machen knew he needed a plan and a vision.

“We were experiencing, at that time, the beginning of the growth spurt we’re seeing now,” he said. “My plan was to continuously build upon our successes and to continue breaking new ground in K-12 education. Looking back, I think an effective leader is an active learner. I learned so much from those who influenced my life and through the successes, disappointments and challenges that came from this journey.”

The reality now is that his day-to-day duties as superintendent are coming to an end. His replacement, Scott Smith, was named in May and the two have been working together during this transition period.

Smith will officially take over July 1 and be sworn in at the July 7 school board meeting.

“It’s a bittersweet time because this school system has been a part of my life for over five and a half decades,” Machen said. “We are a school family and our family extends beyond the four walls of the schools. When you’ve been part of a family for that many years, of course it is emotional because that part of your life is coming to an end. I pray that I can continue to be part of the extended school family for many years.”

But Machen knows this isn’t his final goodbye.

“Where I have been tremendously blessed, I think that my journey is just beginning,” Machen added. “The anxiety now is figuring out what God has planned for me next. The challenges, the set backs, the experiences, the mistakes that I made along the way, God used them to make me a better person. Do I feel that I was an effective leader? Based on the people God placed in my life, I can’t help but think so.”

Before being named the new Superintendent, Scott Smith previously served as Assistant Superintendent of Administration for Bossier Parish Schools, a position he held since 2009. Smith received nine of the school board’s 11 votes to become the system’s new superintendent.

“Scott is a proven, effective leader,” Machen said. “His journey has allowed the influences along his own journey help mold him into the person he is today.” His advice to Smith is to “remain confident in your ability to lead” and to “allow God to lead your path.”

Despite not having an active role in the school system, Machen said he will still be around.

“I have eight wonderful grandchildren that are all school-aged,” he said. “I will have the opportunity to be involved in their lives in a different capacity now and can enjoy their successes in grandpa mode, not as the superintendent.”

Machen said he also has plans to travel, do some fishing and will be ready for the next door of opportunity God opens.

“Our community sees the school system as the heart of our community and is willing to invest, support, and encourage the growth and continuous development so that we can stay on the cutting edge and ahead of the issues that other districts may face. We will continue to grow and improve because we all recognize the role we play in this system’s future,” Machen said. “I was blessed to be able to have the experience of leading the best of the best. Thanks for giving me the opportunity to be part of that.”

A reception will be held in Machen’s honor Thursday, June 16, from 4:30 to 6 p.m. at the Bossier Instructional Center, located at 2719 Airline Drive in Bossier City. The public is both welcome and encouraged to attend. 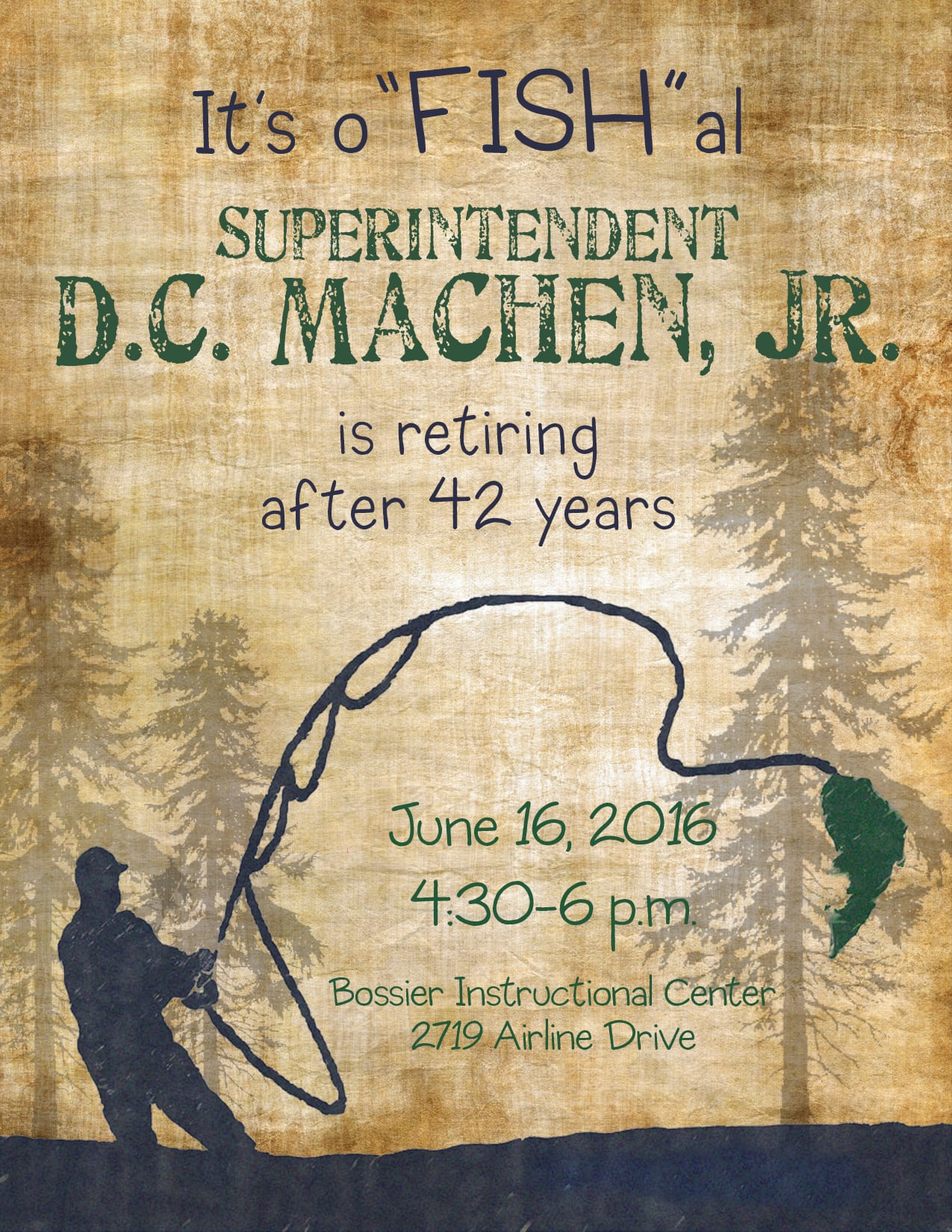