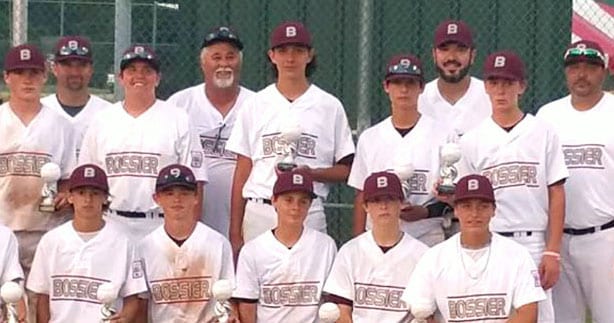 Bossier rallied from a 7-2 deficit with six runs in the bottom of the sixth inning to win Game 1 of the best-of-3 series 8-7. Bossier took advantage of some JPRD mistakes and Gavin Roe had a bases-loaded triple. Bossier rolled to an 11-0 victory in the second game.

Bossier advances to the Dixie Boys World Series Aug. 6-10 in Pineville. Bossier is scheduled to play Pineville in its first game at 8 p.m. on Aug. 6.

Jerry Lutterman is the head coach. Joe Tynes and Aaron Vorachek are the assistant coaches.

Bossier, which finished the double-elimination tournament 5-0, advances to the Dixie Jr. Boys World Series which will also be held in Pineville at the same time as the Dixie Boys. Bossier will face the Georgia state champion in the first round.

He said every player on the team contributed in some way throughout the tournament.

“A kid or two stood out in each game,” he said. “Every kid throughout stepped up and made big league plays or got multiple hits. There wasn’t a kid in the lineup who didn’t contribute.”

Lutterman said every pitcher was outstanding.

Lewis pitched the first three innings in the 8-7 Game 1 victory against JRPD. Connell pitched the final four innings to get the win. Garmany had a couple of hits.

Tynes went the distance in second game, pitching the shutout.

Lutterman said Connell made a great play at shortstop in Game 2, stabbing a sharply hit ball and throwing to first baseman Clark, who made a backhanded scoop for the out. Roe added a double to go with his triple in the first game.

Lutterman said the big Game 1 comeback set the stage for the Game 2 rout.

“That really says a lot about our kids, to be down down on their home field and rally and beat them,” he said. “That kind of took the wind out of their sails.”

Taking advantage of its opportunities, Bossier scored a couple of early runs to keep the momentum going and rolled to the victory.

“We had some timely hits,” Lutterman said.

Lasiter went 4-for-5 with a home run, double and five RBI in the title game, according to statistics on the team’s GameChanger account. Stovall went 3-for-3 with a triple and three RBI. Parks and Ross had two hits and two RBI each.

Steans had two RBI. Parks and Lucas McKain had doubles. Liam Rogers also had a hit.

Jones pitched a 5-hitter and struck out seven in the 2-1 win over JPRD. Hull and Stovall had triples and Knotts had an RBI. Rogers also had a hit.

Ross allowed just one hit in three innings and struck out four. Lasiter struck out two in the fourth and final inning.

Parks allowed just two hits in five innings and struck out six in the 9-0 win over JPRD. Shankle didn’t allow a hit in the final two innings.

Lasiter had two hits, including a double, and two RBI. Ross had a two-RBI double. Stearns also had two RBI.

Stovall had a three=run home run against Franklin Parish. Lasiter had two hits, including a triple, and two RBI.

McKain went 2-for-3 with two doubles and three RBI. Rogers had two hits, including a double. Ross and Hull had two hits each. Knotts, Stearns and Parks had hits.