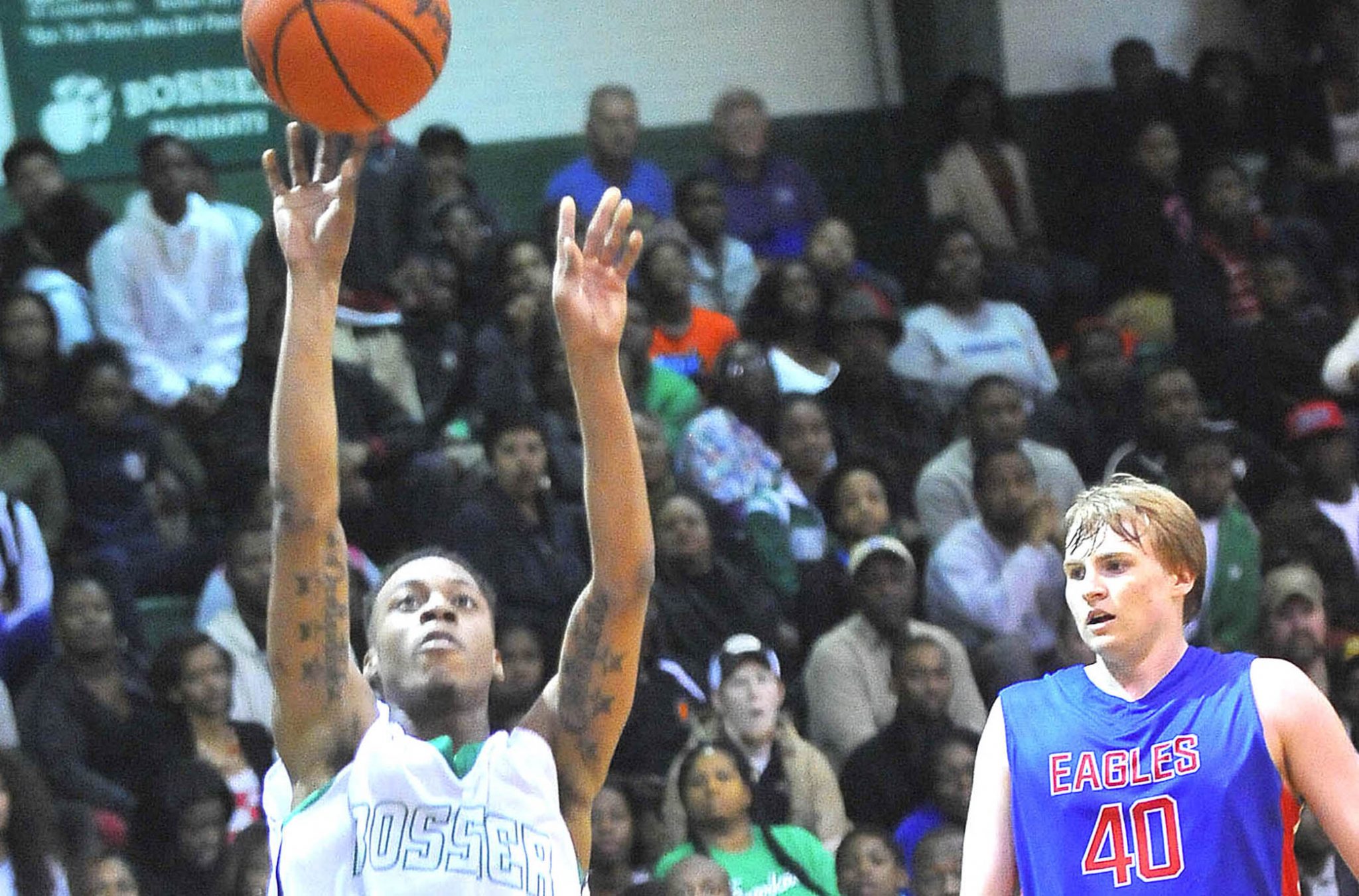 Hall, playing with flu-like symtoms that had dogged him since Saturday, made two free throws with 12.4 seconds left in overtime to lift Bossier to a 48-47 victory over the Parkview Baptist Eagles in a Class 3A second-round playoff game at Bossier.

For a while, it looked like No. 2 was going to go down, too.

He scored eight points in the fourth quarter, including a perfect 4-for-4 cluctch free throw shooting down the stretch.

“This is our senior year,” Hall said. “I really want to win for the team. I just need to keep it tough on myself so my team can battle with me and get the win.”

With about three minutes left in regulation, Hall doubled over and had to be helped off the court.

He came back immediately. After the game, he lay prone on the court for a few minutes before getting up.

“He’s been sick about a week,” Bossier coach Jeremiah Williams said. “For him to come in the way he played, he still made plays for us and he wasn’t 100 percent.

“None more than those free throws down the stretch. You talk about big free throws. Down one at the line with 12 seconds left.”

Hall’s free throws came after he missed a short jumper, but the Bearkats came up with the big rebound.

Parkview (16-12) then had a chance to win. The Eagles got the ball on the baseline to Matthew Starks, who drove inside.

But he threw up an airball thanks to some tight defense by Malik Dunn.

Dunn was tied up by a Parkview player on the rebound, but the ball went to Bossier on the jump ball. The Bearkats inbounded the ball and time ran out.

Hall’s free throws and one by Dunn were Bossier’s only points in overtime. Reed Vial, who led Parkview with 21 points, hit a shot to give the Eagles a 1-point lead with about two and a half minutes left.

Bossier committed an offensive foul on the inbounds play. Parkview missed underneath and the jump ball went to Bossier.

Jerico Moss made one of two free throws, giving the Eagles a chance.

Anthony Stove drained a 3 at the buzzer to send the game into OT.

The game was tight all the way. Bossier trailed 14-12 after the first quarter but rallied to take a 22-19 halftime lead.

Parkview’s 6-foot-9 forward James Thompson picked up four fouls in the first quarter, but the Eagles played well without him.

Bossier went cold in the third quarter, and the Eagles took a 32-26 lead late and had the ball. But a big steal and a layup made it 32-28 after three.

Kentrell Hardy, who scored 13 points, came up big with a three-point play followed by a 3-pointer to give Bossier a 34-32 lead.

Parkview had the ball down by three with just over two minutes left. Thompson was whistled for his fifth foul battling for position underneath the basket.

The Eagles were hit with a technical foul. The Bearkats made only one of the two free throws to go up 40-36 with 2:07 left.

Parkview rallied and cut it to one on a steal and layup with 55.7 seconds remaining.

Hall hit two free throws to put Bossier back up by three, setting the stage for the finish.

Elsewhere Wednesday, Louisiana New Tech at Plain Dealing, the No. 12 seed in Class 1A, fell to No. 5 Christian Life 65-56 in a second-round game in Baton Rouge.

The Lions, who finished the season 19-9, fell behind early and trailed 19-13 after the first quarter.

New Tech made a run in the second and got within five with about two minutes left in the half.

But the Crusaders withstood it and led 34-26 at the break.

A big difference in the game was at the free-throw line.

Christian Life made 31 to just nine for New Tech.