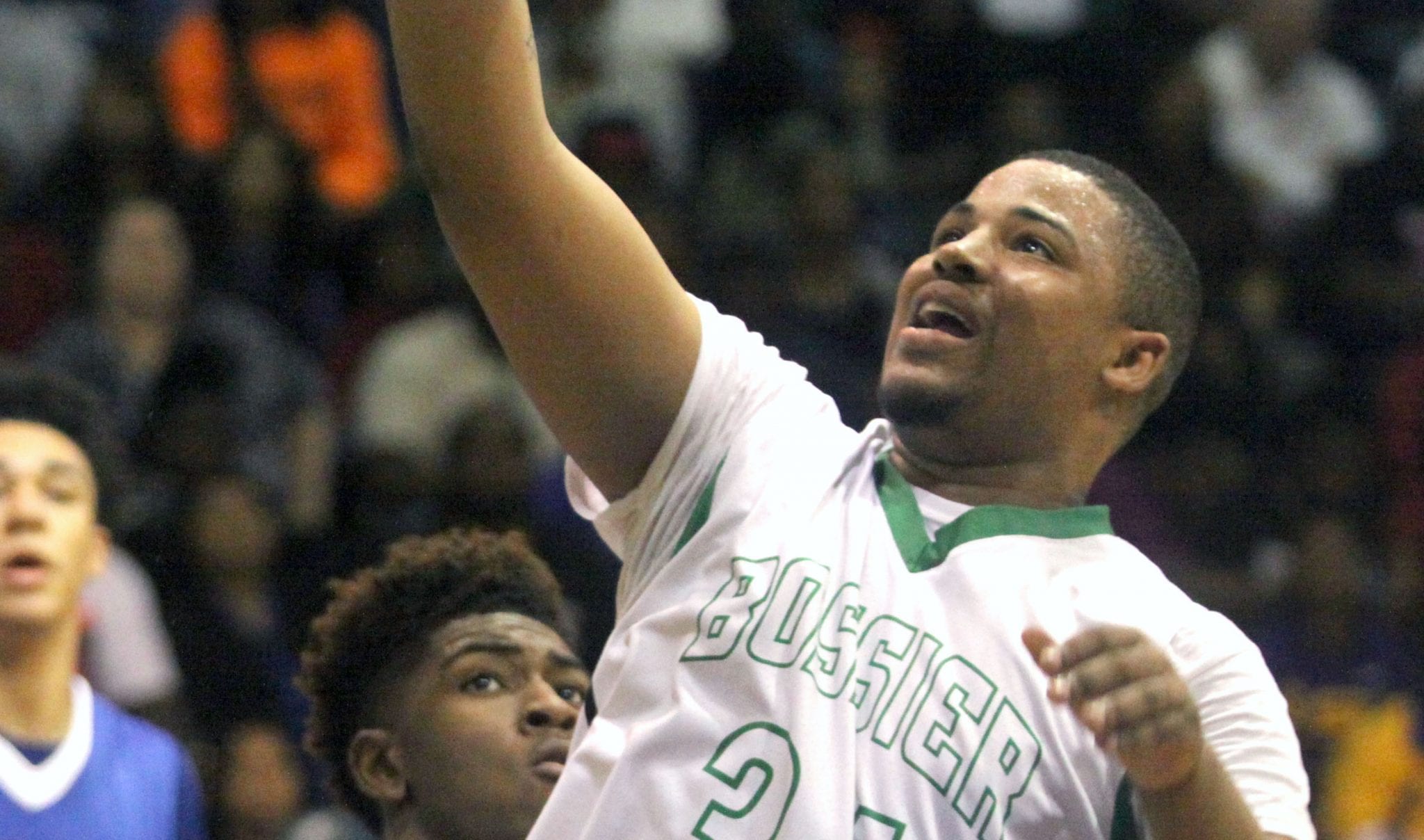 Chris Davenport’s layup as time expired lifted the Bossier Bearkats to a thrlling 63-61 victory over the A.J. Ellender Patriots in the quarterfinals of the Class 4A state playoffs Friday night at Bossier.

“It’s special,” Bossier coach Jeremiah Williams said. “It’s always special to make it there. It’s a credit to our coaching staff and all the work we’ve put in and the efforts of the kids. It kind of culminates the season to have an opportunity to be in the high school final four. We’re excited about it.”

Bossier led 59-53 with about two minutes left, but three Bearkats were on the bench with five fouls. One of those was senior guard Larry Robinson III, Bossier’s leading scorer on the season. Also out were post players Antonio Davis and Dontaveous Washington.

The Patriots went on a 6-0 run to tie with 1:06 left. The Bearkats went back up by two, but Ellender hit two free throws with 7.2 seconds remaining.

Bossier had no time outs left. Freshman guard Jacoby Decker drove down the left side of the court and angled toward the basket. He dished the ball to a wide-open Davenport who scored as the buzzer sounded.

Tyrese English, a 6-foot-1 junior guard, had another big game for Bossier. He hit three 3-pointers, led the team in scoring with 21 points and also grabbed six rebounds.

Davenport, a 6-6 junior, finished with 10 points and four rebounds. Robinson and Decker scored seven each. Decker’s assist to Davenport was his fourth of the game.

The first half went about how many Bossier games have gone this season. Ellender had difficulty dealing with the Bearkats’ tight defense and the game was low scoring.

It was tied at 17 with 3:20 to play. Then Bossier scored the final seven points of the half, including a 3-pointer that followed quickly after a two-pointer with less than a minute to play.

Quantavious Capers and English hit 3-pointers in the quarter. Capers also had five big rebounds in the game.

“I thought we did a good job with two things, handling the pressure and taking advantage of our opportunities,” Williams said. “We played poised and were not letting them dictate the tempo in the first half. Then the foul trouble came.”

Ellender rallied in the third quarter behind Quentin Scott, a 6-7 senior and the Patriots’ top scorer on the season.

Held to just three free throws in the first half, Scott erupted for 16 points in the third quarter and Ellender trailed by just 44-42 going into the fourth.

Williams said the Patriots able to play to their strengths late in the third and fourth quarters.

“The officials let ‘em play,” he said. “They would ride and hold us, but that’s no excuse. You’ve got to play through that. But it makes it tough on you.”

Decker scored all seven of his points in the third quarter. English scored eight, including a 3-pointer.

Williams said there were several unsung heroes in the victory — the players who don’t see much playing time but serve as the scout team in practice.