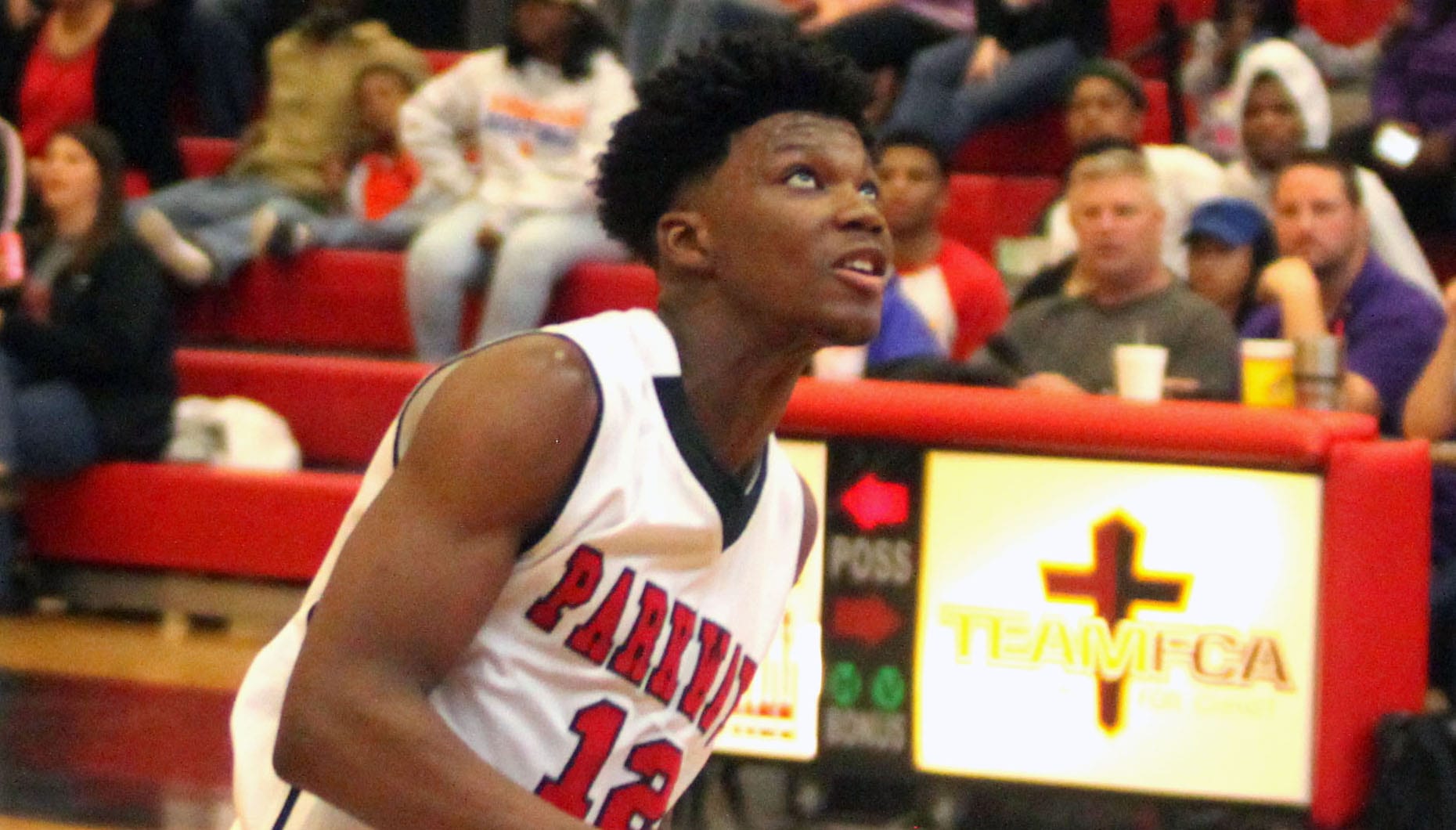 Less than 24 hours after a disappointing loss to Evangel and with their season perhaps on the line, the Parkway Panthers dug down deep and found something inside themselves Saturday afternoon.

Parkway trailed by 11 at home going into the fourth quarter against the Southwood Cowboys in a game to decide District 1-5A’s first-place representative in the state playoffs. A loss would mean the possibility of missing the playoffs despite winning 20 games and the district co-championship.

So Parkway coach Mike Guess was forced to do something he normally doesn’t like to do — go to fullcourt pressure defense.

It began paying dividends almost immediately. Two quick steals resulted in fastbreak layups and the Southwood lead was down to seven.

There was more of the same. Less than three minutes into the quarter, the Panthers had tied it at 49.

Thanks to more good defense and clutch free throw shooting, Parkway went on to a remarkable 66-61 victory. The Panthers outscored the Cowboys 28-12 in the fourth quarter.

“Pressing is really not our identity,” Guess said. “Halfcourt defense and around the goal, that’s really our identity. That’s who we are. But we were in a position where we had to press and our guys did a great job.”

Parkway and Southwood officially are District 1-5A co-champions. It’s Parkway’s first title since the 1999-2000 season. Senior Keondre Wudtee was the lone returning starter off a team that finished runner-up last season and advanced to the quarterfinals.

“It means so much,” Guess said. “I’m so proud of these guys. I’m telling you. We had 11 seniors on last year’s team — one player returning with any varsity minutes. And the rest of these guys were freshmen and JVs and they really just fought so hard through a lot of adversity.

“And see right up there that red banner, that was the last time Parkway had won district, 1999-2000. It’s been a while. Last year’s team went to the quarterfinals but they weren’t district champs.”

Parkway came into the game with a power rating of No. 32. The top 32 generally make the playoffs, so the Panthers’ season may have continued even with a loss. But they likley would’ve faced the top seed in the first round.

The district’s first-place representative receives one power ranking point. That should help Parkway (21-10), which was No. 37 in the power rankings just last week, move up far enough to avoid the top seeds. Official pairings will be announced Monday.

“For us to get at least a halfway chance in the bracket we knew we had to win district and get that extra bonus point,” Guess said. “We might not even get in after last night if we didn’t win today. Be a real shame for a team with 20 wins not to get in the bracket.”

Parkway and Southwood split their regular-season district games. The Panthers won 60-50 on Tuesday at Southwood, and the Cowboys won 47-43 on Jan. 22 at Parkway.

They finished tied atop the 1-5A standings at 10-2 after Parkway lost to Evangel Christian 55-51 Friday night and Southwood defeated Airline 67-58. The Panthers let a 12-point third-quarter lead slip away against Evangel with a chance to win the outright title.

Southwood didn’t have as much on the line Saturday. Regardless of the outcome, the Cowboys (22-7) were going to share the district championship and host a first-round playoff game. The power ranking point might’ve pushed Southwood up a few spots from their current No. 10 ranking.

But Southwood came to play. They led most of the second quarter and took a 31-30 lead into the lockerroom. Parkway sophomore Terrace Marshall hit two 3-pointers and Kamren Davis had a three-point play to keep the Panthers close.

Shakelvin Calhoun, who led the Cowboys with 21 points, hit three 3-pointers in the third quarter as Southwood extended the lead. Through the first three quarters, 3-point shooting was the difference in the game. The Cowboys hit nine but only one in the fourth quarter.

After Parkway rallied, Marshall came up big at the line. He sank 8-of-10 free throws down the stretch and scored 10 of his 19 points in the fourth quarter. Marshall’s final two free throws came with 13.8 seconds after Southwood got within 62-59 on a 3-pointer.

Junior Robert McKnight led Parkway with 20 points with many of those coming on drives to the basket. He was 4-of-5 from the line in the fourth quarter. All told, Parkway sank 14 of 18 free throws in the final period.

Freshman Kamren Davis added 11 points. He scored on a layup after a steal during the big rally. Later, after Parkway forced another turnover, Davis dunked to put the Panthers up by three.

The 6-foot-5 Wudtee ran the Panthers’ offense as usual, sometimes posting up after bringing the ball downcourt.

Last fall, Wudtee led Parkway to a share of the 1-5A title at quarterback. A two-time All-Parish MVP, he originally committed to Louisiana Tech and planned to graduate in December and enroll at Tech in January. But he changed his mind, eventually signing with Oklahoma State earlier this month.

Now he is a football and basketball district champion. So are Marshall, an All-Parish receiver last season, and McKnight, an All-Parish running back. Sophomore Justin Rogers, Parkway’s future quarterback, also contributed to the Panthers’ success.

Seniors Chrishaun Harris, Trey Webber and Tucker Wiggins also did their part to help the Panthers win the title.

Because of an amazing comeback, their season continues.