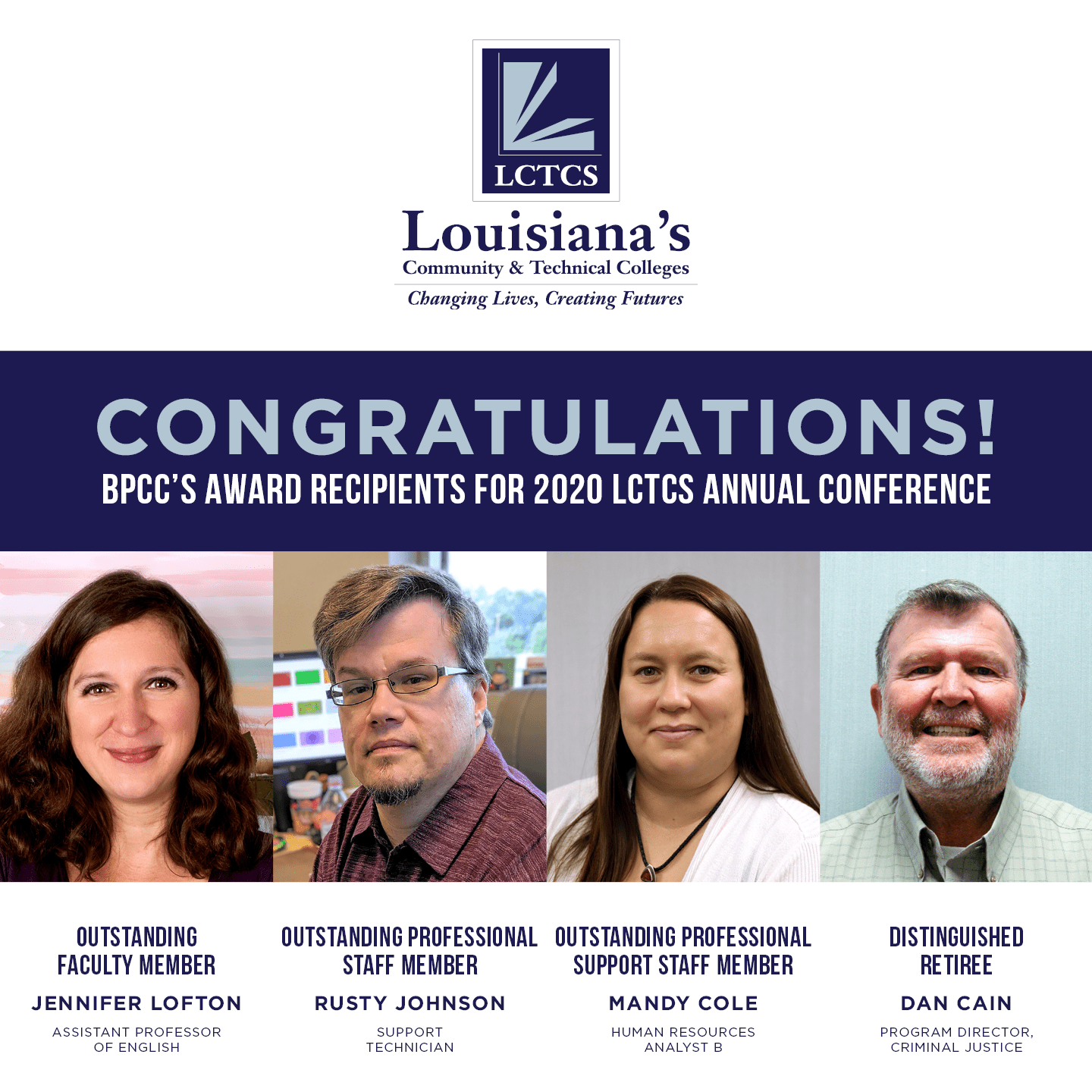 BPCC’s award recipients for 2020 are:

Jennifer Lofton began working for BPCC as an adjunct in January 2014. Later that year, she was hired to teach as a full time English instructor. During her first year in the English department, she was introduced to Peggy Fuller and hired as a part-time employee at the advising center that summer. She loved being able to work closely with the students in the classroom and outside of the classroom in a different setting. Jennifer also teaches as an adjunct at Louisiana Tech Barksdale, and is an alumnus from Tech as well. She received both her B.A. in English and M.A. in Language and Literature at Louisiana Tech. Jennifer first taught in North Carolina at a community technical college before returning to North Louisiana and teaching for BPCC. Since her start at BPCC, she has been able to play leadership roles in committees such as Professional Development and Grade Appeals, and she has served on several ad hoc committees within the Liberal Arts Department. On campus, she has had the pleasure of advising wonderful individuals to help with starting their degree and career path and takes pride in watching her students begin in English developmental courses then graduate with their associate’s degree.

Rusty joined Bossier Parish Community College and the LCTCS Family in 2005 as a member of the D of Telecommunications. With that Division, he was part of the early successes of the BPCC Film Institute as they earned multiple awards. He played a major role in the production of six feature films and three feature-length documentaries; one of which was broadcast across the State as part of LPB’s annual membership drive in 2008. In 2013, Rusty transitioned to the Division of Educational Technology where he has been instrumental in the development of quality online and hybrid courses. He provided early support to the BPCC Open Campus initiative by assisting faculty with the lecture capture process. In 2015, with the help of generous grant funding, he implemented a campus-wide video streaming platform used primarily for lecture capture but has since been adopted for livestreaming graduation ceremonies and BPCC Athletics events. In 2016, Rusty was recognized with the John and Suanne Roueche Excellence Award from the League for Innovation in the Community College, and in 2018 he became a Google-certified I.T. Support Professional. He currently serves as a member of BPCC’s Faculty/Staff Steering Committee as they help shape the future for the institution. Since 2008, Rusty has been the voice of Cavaliers Basketball performing public address duties.

Mandy Cole is a Human Resources Analyst B at Bossier Parish Community College. She joined the Human Resources team at BPCC as an Administrative Coordinator 3 in 2015, was promoted to Analyst A in 2018, and recently accepted her new position as Analyst B in April of 2020. Having worked mostly in customer service based industries, she understands the value of promoting a positive culture and enjoys helping her fellow coworkers. Mandy is a north Louisiana native, and lived in Mississippi for 15 years before returning and making Louisiana home again. Mandy and her husband Michael are the parents of three daughters. Their family enjoys camping and hiking.

Dan recently retired on June 30, 2020 with an accrued forty and a half years of service with Bossier Parish Community College (BPCC) working with the Criminal Justice program. Dan became a Dallas Police Officer in 1973 after graduating with a bachelor’s degree from Northeast Louisiana University. Dan went on to graduate school at Sam Houston State University and earned his master’s degree in Police Science and Administration, while still working for the Dallas Police Department. In 1981, Dan was given an opportunity to return to his hometown of Bossier City, Louisiana and take over a brand-new criminal justice academic program at BPCC. That program started with an average of 15 students per semester and has grown to a current average of approximately 400 criminal justice students per semester. Dan and his wife, Mimi, have been married now for 46 years and have four grown children.