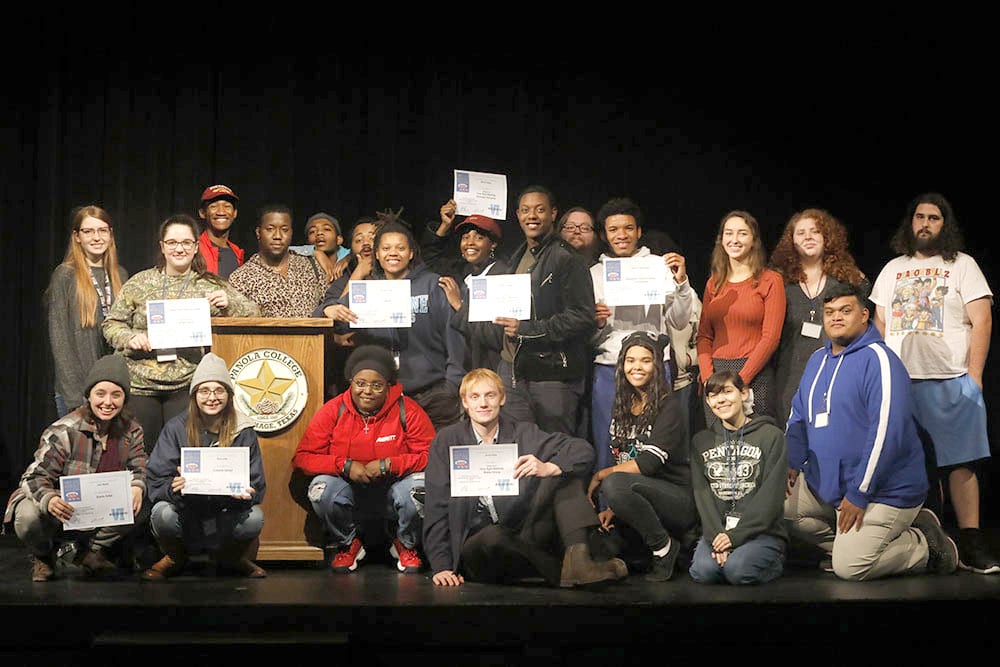 The three-day festival of theatre productions from colleges and universities across the state, hosted by Panola College, ended with an exciting awards presentation.

Urinetown (The Musical) received the honor of “Performance as an Invited Scene,” which indicates the official festival adjudicators’ selection of “Run, Freedom, Run” from the show will be presented at the Region VI KCACTF Festival to be held in Abilene, Texas, in February 2020.

Dean of Communication and Performing Arts Dr. Ray Scott Crawford directed the production and the Cavalier Players produced the show, which was presented in the Stephen W. Slaughter Theatre at BPCC earlier this year.

The production’s technical crew received the “Excellence in Load In” for their level of professionalism and skill to load in and set up the set, lights, sound, costumes, and props for the production. The cast of chorus members and dancers were awarded “Excellence in Ensemble Characterization Townspeople” for their performance in creating the world of Urinetown.

Rona Leber, Associate Dean and Costumer, received the “Excellence in Costume Design” award for her costume designs for Urinetown (The Musical).

The cast members of the show also received individual awards. For excellence in acting, Mikah Thomas, Jeroen Kales, and Malicia Owens received Irene Ryan Nominations for their roles as Officer Lockstock, Bobby Strong, and Penelope Pennywise in Urinetown (The Musical). The three students will now compete in Texas in February against approximately 400 other students from Region VI for a chance to win the Irene Ryan National Scholarship and appear at the Kennedy Center at National Festival in Washington D.C.

The KCACTF encourages, recognizes, and celebrates the finest and most diverse work produced in university and college theatre programs across the country. Region VI includes Arkansas, Oklahoma, Louisiana, Texas, Missouri, and New Mexico. Eight plays will be chosen from this six state area to perform at the Region VI festival in San Abilene, Texas, Feb. 23-27, 2020.