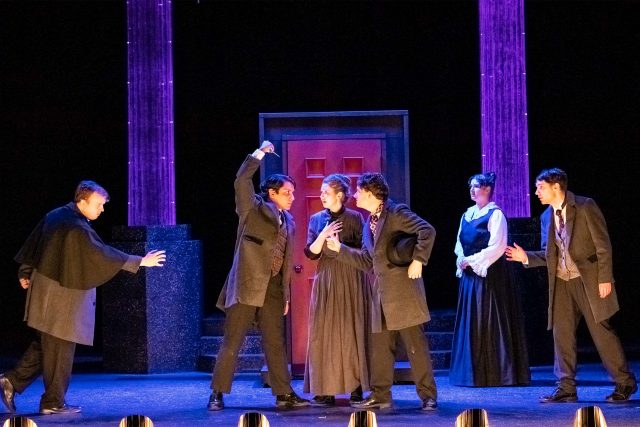 Dr. Jekyll & Mr. Hyde was selected by the official KCACTF respondents to be held for consideration for the Region VI annual festival. This recognition places Dr. Jekyll & Mr. Hyde among a small and limited set of nominees from which five plays from the region will be selected to present at the Region VI KCACTF Festival in February 2022. Dr. Ray Scott Crawford, Dean of Communication and Performing Arts, directed the production and the Cavalier Players produced the show which was presented in the Stephen W. Slaughter Theatre, Bossier City.

The cast members were awarded “Excellence in Ensemble Scene Changes” for their performance in transitioning the set pieces from scene to scene.

The cast members also received individual awards. For excellence in acting, Josue Escobar, John Medlin, and Candice Lott received Irene Ryan Nominations for their roles as Henry Jekyll, Sir Danvers Carew/Hyde 2, and Poole/Hyde 4. The three students will now compete against approximately 400 other students from Region VI for a chance to win the Irene Ryan National Scholarship and to appear at the KCACTF National Festival in Washington D.C.

Other cast members, Cason Smith and Sarah Johnson, earned Irene Ryan nominations for their performances in the spring production, The Good Doctor. They too will compete at the KCACTF Region VI Festival for their chance to win the Irene Ryan National Scholarship.

The KCACTF encourages, recognizes, and celebrates the finest and most diverse work produced in university and college theatre programs across the country. Region VI includes Arkansas, Oklahoma, Louisiana, Texas, Missouri, and New Mexico. Five plays will be chosen from this six-state area to perform at the Region VI festival in February 2022.