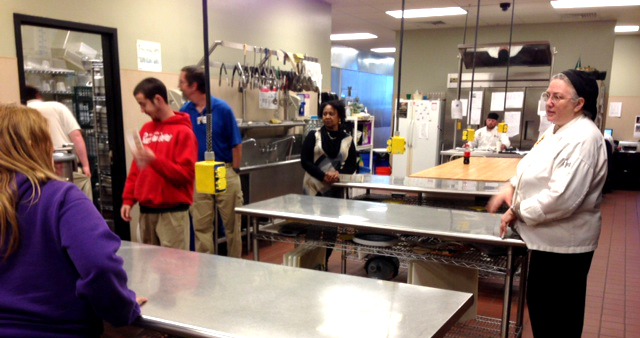 Finding work can be difficult — especially if you have a disability. But Bossier Parish Community College is helping to change that through its Program for Successful Employment.

The program is currently in a pilot stage, according to director Rebecca Hanberry, but has had success so far.

“It’s been in the planning stages for years, but we just had the first class start in January,” Hanberry said. “What we’re doing right now is simply a pilot with Bossier Parish schools, but we hope to exit that stage in August. As the word gets out, more people want to come and more school districts want to participate.”

The program focuses on vocational training for people with cognitive or mental disabilities, and for people with autism. Hanberry made a point of stressing the difference between the two.

“Those two things don’t always go hand-in-hand,” she said. “Someone that has autism doesn’t necessarily have a cognitive issue.”

The Program for Successful Employment (PSE) was inspired by another similar program called College Life is Possible (CLIP). Established by the Bossier Parish school system, CLIP was designed to help students with cognitive disabilities and autism take the next step in their education.

These students, Hanberry explained, were still in high school in their late teens and early 20s, attending classes with 15- and 16-year-olds, and becoming frustrated and discouraged by it. CLIP sought to make it possible for them to continue their education on a college campus, taking classes that focused on vocational skills.

“[That] was kind of the precursor to the Program for Successful Employment,” Hanberry said.

From there, they looked into other programs around the country to get a more concrete idea of what the PSE should look like. Using the models of the programs she had researched, they created what Hanberry calls the customized employment model.

They go to local businesses and find out exactly what sort of position needs to be filled. Then they find one of their students who has expressed interest in that area and begin training the student for that specific job.

So far, the community’s response to the program has been positive.

“We have 20 to 25 businesses that are currently interested in accepting an intern,” Hanberry said. “But we could always use more.”