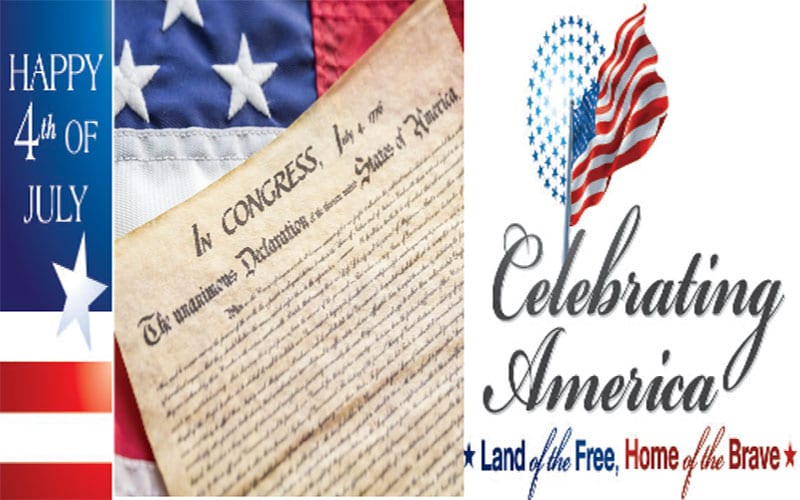 Today is the Fourth of July, and this holiday is one of my very favorite and most memorable holidays of the year. July 4, 2019, officially marks America’s 243rd birthday. It was on July 4, 1776 that Congress adopted our Declaration of Independence (though history shows that our Declaration of Independence was actually voted on and signed in the Second Continental Congress on July 2, 1776).

Of course, not all nations can say this. And sometimes, I wonder about the erosion of some of our freedoms in this country. In many ways, it seems that we see some of our freedoms and privileges slipping away right before our very eyes. As U.S. citizens, we are guaranteed certain rights and privileges by our Constitution. To say that our Constitution is a “work in progress” or imply that our rights and privileges can be taken away based upon a certain political leader’s aspirations or beliefs is a complete 180 degree turn from the direction that our Founding Fathers intended for our nation to follow. That line of thinking/philosophy goes directly back to the tyrannical king from which our founding fathers were fleeing when they founded our great nation.

If you research our Declaration of Independence, you will find that it begins by stating:

“The Unanimous Declaration of the Thirteen United States of America – When in the course of human events it becomes necessary for one people to dissolve the political bands which have connected them with another and to assume among the powers of the earth, the separate and equal station to which the Laws of Nature and of Nature’s God entitle them, a decent respect to the opinions of mankind requires that they should declare the causes which impel them to the separation. We hold these truths to be self-evident, that all men are created equal, that they are endowed by their Creator with certain unalienable Rights, that among these are Life, Liberty and the pursuit of Happiness.”

Our Founding Fathers were very religious. They wanted our nation to be directed and led by God. Separation of Church and State does not mean that there is to be no religion at all. It means that our government can not tell us which religion that we have to be – as was the case in Great Britain.

I hope that you all have a very happy, safe and fun Fourth of July and let’s celebrate our great nation together!