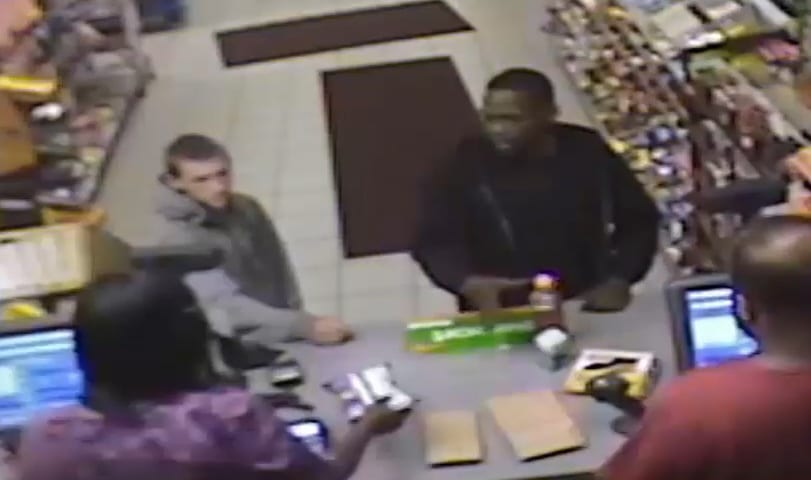 Bossier Sheriff’s Office detectives are asking the public’s help in identifying two men who stole credit/debit cards from a parked vehicle in south Bossier and then went on a shopping spree in Shreveport.

On May 24 around 7:30, a man and his kids were testing a new minnow catcher near the boat launch at the Red River National Wildlife Refuge off of Arthur Ray Teague Parkway.  The man told detectives he remembers seeing a white, older model, beat-up car parked there when he arrived, but saw no one around.  He and his kids returned to his vehicle a short time later and drove off.  The next day, however, the man contacted law enforcement when he realized his credit cards that were inside the vehicle had been stolen.  He indicated there appeared to be no forced entry.

Bossier detectives determined that two other men had used the stolen credit cards to make purchases of more than $1,300 at 11 different retail stores and gas stations in Shreveport on late May 24 through early morning hours of May 25.  Detectives obtained surveillance video at one of those locations, a gas station on the 3700 block of Hearne Ave.  The video shows what appears to be a white, 4-door older model Ford Taurus entering the parking lot around 9:40 p.m. May 24 (about two hours after the credit cards had been stolen).  A black male exits the driver’s door, and a white male exits from the front passenger door.  The two suspects enter the store together, bring some items to the counter, and the black male suspect hands the cashier one of the stolen credit cards.  The two suspects then exit the gas station and drive away.