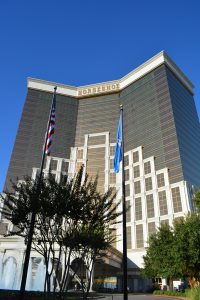 A statement released by CEOC outlines the steps it has taken to implement a restructuring plan in order to strengthen its financial position. A full statement found on the company’s website is as follows:

“On January 15, 2015, Caesars Entertainment Operating Company (“CEOC”), a subsidiary of Caesars Entertainment that owns and operates many of the properties in the Caesars Entertainment network, voluntarily filed for reorganization under Chapter 11 of the United States Bankruptcy Code. CEOC took this action with the support of certain of its bondholders to implement its previously announced restructuring plan. The plan is intended to significantly reduce long-term debt and annual interest payments, while providing for significant recoveries for creditors and ensuring no interruption of operations across the company’s network of properties.”

Despite this action, all Caesars Entertainment properties in Bossier City are open for business and all operations at Louisiana Downs and Horseshoe Bossier City continue as usual.

The statement from Caesars Entertainment notes that their “top priority” of “maintaining the highest level of service” remains. It also says that “guests will continue to have the same great experience and receive the same great service they are accustomed to.”

Caesars Entertainment Operating Company (“CEOC”) is a subsidiary of Caesars Entertainment that owns and operates certain properties in the company’s network. Chapter 11 is a court-supervised process that enables companies to reduce their debt while continuing to operate in the ordinary course.

For additional information about CEOC’s financial restructuring, including a list of properties included in the Chapter 11 filing, please go to our website at www.ceocrestructuring.com.

Key points about the restructuring plan from Caesars Entertainment:

-All Caesars properties are open for business. All Caesars Entertainment properties – including those that are owned and operated or managed by CEOC – continue to operate as usual.

-Our Total Rewards program remains the same and guests’ status within the program is unchanged. Guests can still earn and redeem Total Rewards credits at our network of properties, and maintain their tier status and other accumulated benefits.

-We are continuing to host meetings and events as scheduled.  Our convention guests will continue to receive the same outstanding service and experiences they have come to expect from us.

-Our top priority remains maintaining the highest level of service. Guests will continue to receive the rich experiences and quality service we are known for providing at our properties.