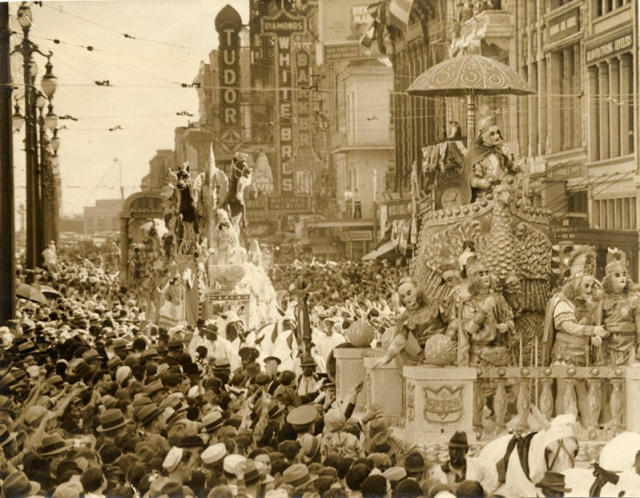 NEW ORLEANS – Lieutenant Governor Billy Nungesser and the Louisiana State Museum announce the opening of a new exhibition, Rex: The 150th Anniversary of the School of Design, at the Presbytère on February 1, 2022. Just in time for Mardi Gras, this new exhibit celebrates the history and contributions of the Rex organization to the Carnival season, and commemorates the sesquicentennial of the organization. Since its founding in 1872, Rex, also known by its official name, the School of Design, has taken on an unparalleled leadership role in Carnival, setting the standard of excellence for the dozens of krewes formed since then. The Rex parade was the first daytime parade in modern Carnival, and the man and woman selected as its monarchs have always served as the king and queen of all New Orleans Carnival.

“Rex has become synonymous with Mardi Gras and Carnival season in New Orleans, reigning over the city as the King of Carnival. While there are many traditions in the city that are the backbone of the annual celebration, the image of Rex parading through the streets of New Orleans is known worldwide,” said Lieutenant Governor Billy Nungesser. “We are thrilled to add this exhibit to our collection just in time for the upcoming Carnival season, adding to the series of exhibits in our museums in New Orleans that have showcased the extraordinary traditions we hold so dear.”

Working closely with Dr. Stephen Hales, historian and archivist of the Rex Organization and author of the new book Rex: 150 Years of the School of Design, the Louisiana State Museum will tell the story of Rex utilizing the museum’s unmatched collection of artifacts, focusing on the sophisticated costumes of the krewe’s kings, queens, and courtiers. The museum made a dedicated effort beginning in the 1920s to gather costumes directly from krewe members. This collection now totals more than 60 royalty and krewe costumes and gowns as well as dozens of sets of rare crown jewels. The exhibition will also feature newly discovered treasures from the krewe’s early years, recently acquired from as far away as Germany and Italy, along with rarely seen artifacts borrowed from private and institutional collections.

An exciting feature of the exhibition will be a specially built float installed in one of the exhibition galleries by the krewe’s float builder, Royal Artists, demonstrating the techniques and materials used to construct Rex’s elaborate, historically inspired floats.

“We can always count on Rex for a beautiful parade that is a world-renowned Mardi Gras event,” says Lt. Governor Nungesser. “And the rest of the year, the organization supports public education.”

An extensive array of educational programs scheduled throughout the run of the exhibition will draw on the krewe’s incorporated name, the School of Design, with a goal of aiding students and families in creating works of art inspired by the krewe’s artistic legacy. The museum will also offer enriching sensory-friendly programs for children with autism and other developmental disabilities.

The exhibition will also explore the vital civic function the krewe has performed since it was founded in large part to boost economic development in the city following the Civil War. After Hurricane Katrina, Rex assumed an expanded philanthropic mission through its Pro Bono Publico Foundation, funneling over $10 million to the New Orleans public school system. Throughout its history, municipal and humanitarian organizations have honored numerous kings and queens of the krewe for their broad-ranging support of essential community causes.

This exhibition is being made possible by IBERIABANK | First Horizon and other generous donors of the Louisiana Museum Foundation.

Rex: The 150th Anniversary of the School of Design will be on display to the public in the Presbytère, located at 751 Chartres Street on Jackson Square, beginning February 1, 2022, and continuing through December 11, 2022. The Presbytère is open Tuesday through Sunday, 9 a.m. to 4 p.m. Admission to the museum is $10 for adults, $8 for students, seniors, and active military, and free for children 6 and under. Visit LouisianaStateMuseum.org for more information.