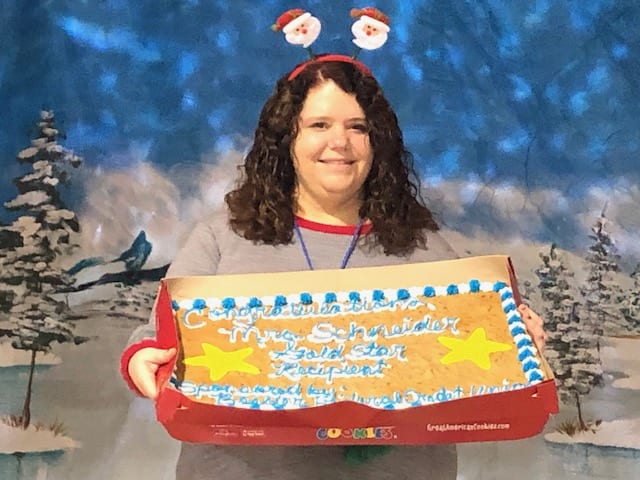 Schneider unwittingly became the center of attention at a Tuesday morning school assembly. She is not one who likes being cast in that role. Thanks, though, to numerous glowing nominations from her colleagues, Schneider was announced as the recipient of Bossier Schools’ Gold Star employee award for December. The gymnasium erupted in applause.

“Calley is such a big link in our chain!” read fellow teacher Paula Ash’s nomination letter. “She is the technology queen! She keeps all our computers up to snuff in a timely fashion. If you let her know something needs fixing, she is on it in a flash. She also has gotten our students all jazzed about technology through the robotics team. We would not run as smoothly without Calley keeping us all up to snuff! Love, love, love me some Mrs. Schneider!”

Other colleagues call her the “definition of above and beyond.” They commend Schneider for always being willing to help in any capacity she is asked, and going out of her way to do so, as well as for wearing so many hats — all with a cheerful heart.

“So many times I’ve asked a question about technology in my classroom and before I can blink she’s in my room working on the issue herself. She’s not one to stand in the spotlight, but she deserves a gold star,” Heather Spivey said.

Julie Frederick echoed those sentiments, writing “Rather than just telling teachers and staff to submit tickets to technology for every problem they encounter, she first attempts to solve the issue herself.”

Frederick added, “Outside of the classroom, Mrs. Schneider can be found coaching the school robotics team, writing grants for school technology, keeping parents up to date on school activities and functions through our school Facebook page, creating the new school website and providing support to teachers who are interested in writing grants or using Google Apps through site-based workshops.”

“Mrs. Schneider is a selfless person who jumps in anywhere she is needed,” added Principal Dr. Vicki Younger. “She gives her time and works hard to avoid personal praise. She is a strong team member. As the technology guru on staff, she can fix anything! She also works with our robotics team and has led them to several wins in recent years!”

“It’s very moving. I mean everyone likes to be appreciated and it makes me want to do more. It’s very motivating,” Schneider said softly after all the excitement sunk in.

This is Schneider’s seventh year teaching in Bossier Parish, although she has spent a total of 22 years in education. Since landing at Central Park, the former fourth grade teacher said she has no plans to go elsewhere.

Schneider has especially enjoyed the challenges her role as computer lab teacher encompasses.

“I love learning new things and being in technology, I get to do that.” She further explained, “I get to see the littles all the way to the big ones. They test you in different ways.”

Schneider also loves to see that spark on children’s faces when they learn. It is one of the many reasons she professes her devotion to teaching, and what makes her shine from the inside out as a Gold Star.

[Editor’s Note: Special thanks to Bossier Federal Credit Union for sponsoring the Gold Star Award, which is now in its seventh year. Know someone exemplary that works for Bossier Schools and deserves a Gold Star? Nominate them by going to https://bit.ly/C1Gvhr.]