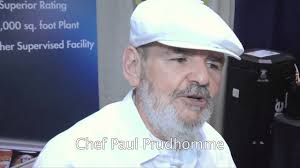 Renowned and well loved Louisiana Chef Paul Prudhomme died this morning in New Orleans, after a brief illness. The news was released by the restaurant he made famous in New Orleans (K-Paul’s). Prudhomme helped put Louisiana cuisine on the map well over 30 years ago. He was one of the nation’s first celebrity chefs – hosting several shows on cooking and Louisiana cuisine. He also authored several books on these same topics. Among his many well known dishes, Prudhomme developed his recipe for blackened redfish back in the 1980’s to a level of national recognition and fame by first serving it in his K-Paul’s New Orleans restaurant.