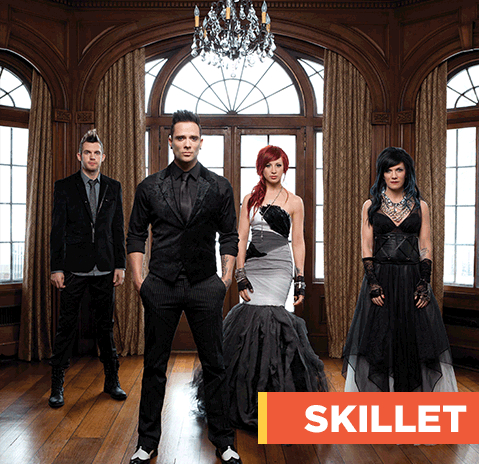 The Roadshow has just kicked off its sixth annual tour, and is set to hit Bossier City in early February.

“Roadshow is cool because it’s not really a concert,” Cooper said. “It’s more of what I would call an event. It’s different artists and extremely varied genres, and that’s why I think it’s awesome that it’s not a rock tour or a pop tour.”

The music selections during The Roadshow will definitely be varied, ranging from Skillet’s well-known hard rock style to the worship music of Third Day and Jamie Grace, among others.

Cooper said that the diversity they always see in the audience is one of the things he likes the most about the event.

“There [are] so many different kinds of people there, it’s kind of crazy,” Cooper said. “And that’s really why I like it. You’re on stage and you look out into the audience, [and] it’s really weird because the age group is like five years old to sixty years old. All different ethnic groups, all different denominations, and you’ll see some jocks and some preppy kids and some goth kids, and it’s just such a great, very diverse night. I really love it because I think it’s just great for people to get out there and mix it up.”

Lack of cross-culturalization among believers is something that troubles Cooper.

“One of the things I think we could be doing better in general,” he said, “is mixing it up with people who don’t think the way we think, and being comfortable being around people that are atheistic or non-religious or a different denomination. And sometimes we’re not really great about that, so I think this is an event that is a step towards cross-culturalization. And I really like that. I think that we could be more effective in what we believe if we would do that more often.”

Ultimately, the Roadshow is all about bringing people from all walks of life together with one common purpose.

“It’s a celebration of faith, and encouraging people not to be afraid to stand up for what they believe,” Cooper said. “And it’s also encouraging people that even though the world is a little crazy right now and a little dark, that there is hope, and there is light through Jesus Christ in this crazy world.”

Although they are a Christian band, Skillet also has a number of fans in the secular part of the music world, which can be an advantage.

“We have definitely seen people come to this event that are Skillet fans that probably would not normally come to it,” Cooper said. “According to the Tweets I’ve gotten, they’ve really enjoyed the night and enjoyed seeing the band play.”

Because Skillet is not what might be considered a “typical” Christian band, Cooper finds that their music tends to resonate with non-believers just as much as—or even more than—it does with believers.

“People outside of the church are more likely to understand our music than people in church,” he said frankly. “Doing this event, there’s so many church folks coming that maybe don’t normally listen to Skillet, or maybe if they heard a little excerpt, they might say, ‘There’s no way that’s Christian,’ and it’s a good chance for us to play our songs and talk about our music, and then they get to know us and see what we’re all about.”

Cooper added that he’s glad to be back in the U.S. after touring overseas for the last several months, and said that he’s excited to get to play some of Skillet’s new songs live.

The Roadshow will be in Bossier City on Saturday, Feb. 8, at the Century Link Center. The admission price is ten dollars, and the event begins at 6 p.m.