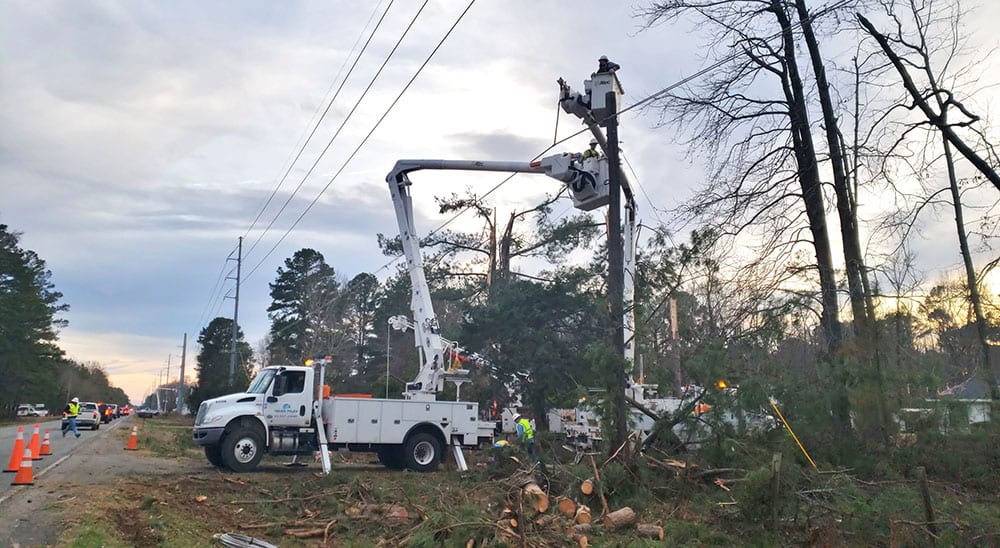 Hundreds of SWEPCO employees and contract crews were very busy over the weekend working to restore power following the EF2 tornado that ripped through south Bossier Parish early Saturday.

Electrical crews from Louisiana, Arkansas, Texas, and Oklahoma began work Saturday at 7 a.m. through 10 p.m. and continued work on Sunday at 6 a.m. to customers off of James Lane, Davis Road, Oliver Road, Highway 157 and other affected areas where the overnight storms broke utility poles, downed wires and felled trees.

At the peak, about 29,300 customers were without power in the Ark-La-Tex.  SWEPCO’s goal was to restore power to the affected areas in Haughton by 10 p.m. Sunday.

Bossier Sheriff’s Office deputies patrolled the affected areas to keep folks safe because of the heavy traffic in the area.  James Road, which is a dead-end, had a flurry of activity with the electrical and clean-up crews, and it became quite congested, and motorists who did not need to be in the area were encouraged to stay away so crews could get their work completed.

The sounds of chain saws and electrical lifts were commonplace in the area as residents were hoping their electricity was restored so they could have some heat for the night…and catch the LSU Tigers win the championship game Monday night.  The scene was also one of neighbors and friends lending a helping hand.

2014 Haughton High School graduate Kevin Bojarski said when he got the call Saturday morning to come help his friends who had a tree fall on their house and truck, he said he didn’t hesitate.

“We dropped everything and just decided to come help out,” Bojarski said, who cut trees and cleaned up limbs.

Montana Turnbull, who is pregnant with their child, said, “We need to help people…we stay together.”

Bojarski says he likes the motto that has arisen in the wake of the tornado and people coming together for the cleanup – “Haughton Strong.”

“I’ve seen a couple of kids I graduated school with, and we haven’t seen each other in five years. Once the natural disaster came through, we’re all getting back together to help the community.”

As cleanup continued into the night Sunday, Bossier Parish Police Jury Highway Department encourages residents to place their debris from the storm near the streets so work crews can begin to pick it up starting Monday.