Who would believe in just three short years, when Coach Perry Norcross first formed an archery team at Benton Elementary, it would catapult to success on a world stage?

In 2014 the Tigers hit the bullseye, being named Elementary World Champions after out-shooting competitors from across the nation as well as Africa, Canada and Mexico. 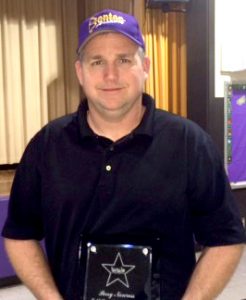 Coach Laurie Chaffin, who teaches alongside Norcross at Benton Elementary, says what many people don’t realize is the amount of time after school and on weekends he spends instructing his archers, and all of it is uncompensated. He truly goes above and beyond, doing whatever it takes to bolster each child’s confidence and make them a success.

“He is giving children an opportunity to be successful in a sport,” Chaffin said. “For example, a student who only has one hand expressed an interest in shooting a bow. Coach Norcross researched and found out a way this girl can shoot using her teeth to pull back the string. This could be a life changing experience for this child.”

Chaffin went on to say, “Perry works tirelessly with his archers and it went from a start-up program to WORLD CHAMPIONS in three short years. Students who may never find success in conventional sports (football, baseball, softball) can be successful in his archery program. He makes a difference for his students!”

“It’s so exciting. He’s brought attention to a sport that’s allowed individual students to be successful,” Anderson said, after Coach Norcross was surprised with the Gold Star award. “That’s what I love about this program. They may not be on the honor roll or popular kids, but they can shoot and it has given them so much self-confidence. I love what it has done.”

So why does Coach Norcross do it? Perhaps the thunderous applause from the students at Benton Elementary and hugs he received from his archers after the surprise assembly is a hint.

“I do it for the kids,” Norcross answered. “These kids don’t do any other activities. All they do is archery. But it gives them confidence to do other things in life.”

He added, “State champions, world championship, all that’s great. But to see the kids be able to do something no one else can do, that’s my reward.”

Since gaining the level of success he has in a short time, Coach Norcross has been offered other opportunities to move on. He says he’s not going anywhere, though, because Benton Elementary is right where he wants to be. There with the kids.