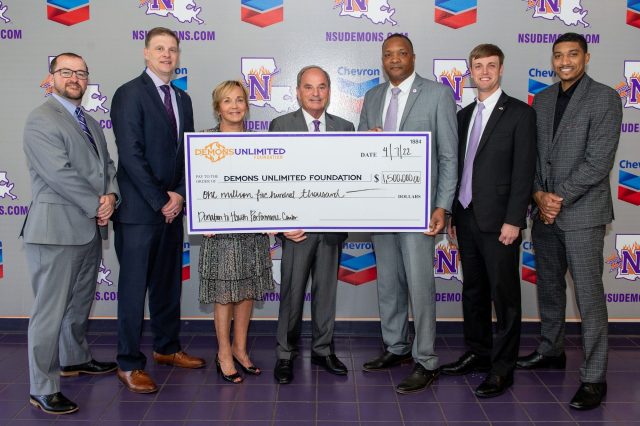 NATCHITOCHES – In his words, attending Northwestern State University was a “game-changer” for both David Morgan and his wife, Sherry.

Years after completing their undergraduate degree in business, the Morgans are returning the favor in an equally game-changing manner.

The couple, with deep Louisiana roots, announced Thursday a donation of $1.5 million that will go toward Northwestern State’s new athletic strength and conditioning facility, which will be christened the David & Sherry Morgan Health Performance Center. The Morgans made their efforts known publicly ahead of their annual visit to campus to honor recipients of the David D. Morgan Extra Mile Scholarship and the Sherry F. Morgan Extra Mile Scholarship along with the First Generation Scholarship awards.

“It was a game-changer for us being at Northwestern State,” said David Morgan, an Alexandria native who now lives outside of Austin, Texas. “The need is there for this facility. My wife and I have been very blessed since our days at Northwestern. I wasn’t an athlete and I didn’t have the God-given talent like they do, but I realize how important it is to have a good athletic program. It is an advertisement for the university, a recruiting tool for students. It drives campus enthusiasm and It is important for the overall success of the university.

The athletic-driven donation is the latest in a long line of philanthropic efforts the Morgans have made in the name of their alma mater. The couple has awarded first-generation Northwestern State students in Pi Kappa Phi fraternity and Sigma Sigma Sigma sorority with scholarships for the past several years, honoring their lineage as first-generation collegiate students.

NSU President Dr. Marcus Jones said, “The numerous scholarships provided by David and Sherry for first generation students and fraternity and sorority leaders have expanded the prominence of Greek life and the overall student experience at Northwestern for years.

“Now this extraordinarily generous contribution from the Morgans along with state allocations will elevate the university’s intercollegiate sports program to new levels of success. Students, alumni, fans and friends of the school will forever reap the benefits of this landmark gift. We are all deeply grateful.”

The Morgans’ gift is the single-largest private gift in Northwestern State Athletics history.

This is a transformative gift, and we cannot truly express the level of gratitude we have for David and Sherry,” Northwestern State Director of Athletics Kevin Bostian said. “Their generosity toward all corners of Northwestern State has been well-documented, and today’s announcement will benefit generations of Northwestern State student-athletes in a building that will bear their name and stand as a testament to their passion for this university and this community.”

The David & Sherry Morgan Health Performance Center will be constructed on the back end of the NSU Athletic Fieldhouse. It will include a new 11,600 square foot weight room with space for more than 100 student-athletes, a 25-foot artificial turf pad, a new nutrition center, student-athlete lounge and offices for the strength and conditioning staff.

The second phase of the project will convert the current weight room into a high-tech rehabilitation center along with other sports medicine upgrades. The third phase will be the renovation of the current Eugene Christmas training room.

Contributions can be made directly to the David & Sherry Morgan Health Performance Center project by visiting https://app.mobilecause.com/vf/Victoriousor by contacting Bostian at bostiank@nsula.edu.