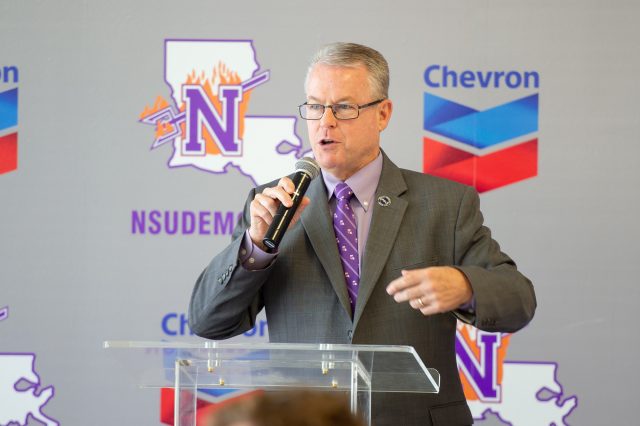 NATCHITOCHES — Greg Burke announced Monday he will step aside after 25 years as Northwestern State’s athletic director to accept another position at the university.

Burke requested to be reassigned to a role in fund raising for the NSU Foundation. He began his NSU career generating revenues as director of the NSU Athletic Association and served for five years as director of athletic development at the University of Akron.

The longest-serving athletic director in Louisiana and the Southland Conference, Burke has guided the NSU athletic department since 1996.  Discussions with university officials about his future role at NSU have been ongoing for several months.

Northwestern President Dr. Marcus Jones said, “Greg has been highly respected by colleagues in college athletics in Louisiana, the Southland Conference, and the nation throughout his long tenure at NSU. His fervent commitment to enhancing and expanding the overall experiences of our student-athletes has never wavered.”

Jones said the university will engage a sports consulting search firm to assist in the search for a new athletic director and that an advisory committee of university stakeholders will also be appointed to provide input in the process. He said a new AD should be selected within six to eight weeks.

Vice President of External Affairs Jerry Pierce said, “Northwestern is indebted to Greg for his years of dedicated service and extensive contributions to the university.  He has made a positive impact on intercollegiate sports in the state and nationally.  I am confident that he will continue to serve the university passionately and effectively in his new role at the school.”

Appointed as Northwestern’s 20th president earlier this month after serving as interim president since July, Jones plans to initiate a major development campaign at the university in 2022.  He said Burke’s “experience and expertise in fund-raising will be valuable as we embark on that important campaign.”

Burke’s shift away from athletics comes during one of the most turbulent times nationwide in intercollegiate sports because of such issues as conference realignments; name, image, and likeness rules; transfer portal implications, and COVID-related disruptions.

Pierce said, “With the turmoil surrounding college athletics nationally and the importance of continuity and stability in our intercollegiate sports programs and experiences for student-athletes, we are fortunate that Greg will continue to serve as AD during the national search for his successor.”

Burke, who announced his decision to the Athletic Department staff Monday morning, said, “The timing is right for me to make this transition to the NSU Foundation. Doing so will enable me to focus solely on raising funds for a university which means the world to my family and me. I have always had a great working relationship with (NSU Foundation Executive Director) Drake Owens and look forward to working with him and his staff.”

A native of Alliance, Ohio, Burke is a graduate of the University of Mount Union in Ohio and received his master’s degree from Kent State University.

He was a sportswriter for the Alliance Review newspaper in Ohio and director of news and sports information at Hiram College in Ohio before joining the NSU Athletic Department as an intern in 1985.

Burke held athletic fund-raising positions at Northwestern and the University of Akron before becoming athletic director at NSU in 1996.

The Northwestern State men’s basketball team produced two NCAA Tournament victories during Burke’s time at the helm of NSU athletics, including one of the most memorable upsets in tournament history – the Demons’ 64-63 upset of third-seeded Iowa on March 17, 2006.

Burke recently began his second of a five-year term on the NCAA Women’s Basketball Committee after previously serving on the NCAA Committee on Academics and Championships/Sports Management Cabinet, the NCAA Division I Football Issues Committee and the NCAA FCS Committee.

Said Burke: “There will no doubt be a void, having worked in college athletics for the past 43 years, but Susu and I will continue to be financially and personally supportive of NSU’s teams and coaches as a fan and advocate. I am forever grateful to Dr. Randy Webb, Jerry Pierce and the Athletic Council led by Dr. Vicki Parrish for giving me the opportunity of a lifetime to lead the NSU athletic program. Over the past 25 years, it has been a blessing to have developed relationships with so many student-athletes, parents, faculty, alumni and NCAA staff members, as well as with coaches and administrators at NSU and nationwide. Much has been accomplished over the course of time but there is always more that can be done to position NSU Athletics for success on all levels. With that in mind, I encourage those who love NSU Athletics to either keep supporting or to begin supporting our student-athletes and coaches because every single gift makes a difference.”