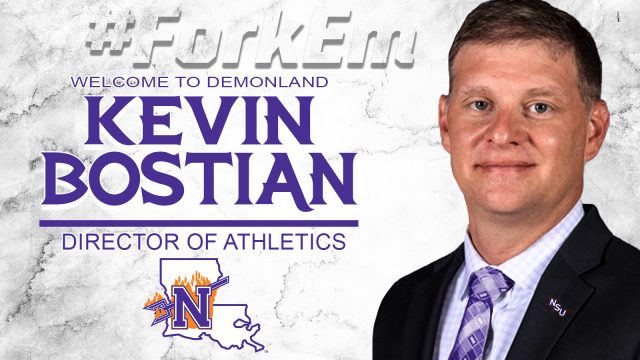 NATCHITOCHES – Northwestern State has named Kevin Bostian as its Director of Athletics.

Bostian comes to Natchitoches from the University of North Carolina Greensboro where he spent nearly two years as the executive associate athletic director for development. Bostian will be introduced at a public news conference at 11 a.m. Thursday in the Student Union Ballroom on the NSU campus.

He is expected to start his duties Feb. 7.

Bostian’s hire is subject to approval of the Board of Supervisors of the University of Louisiana System, which governs Northwestern State University.

Bostian, 43, becomes just the fifth Northwestern State athletic director since 1973, succeeding Greg Burke, who is taking a position as a university fund raiser after leading the NSU Athletic Department since late August 1996.

“My family and I are excited to be starting our next chapter at Northwestern State,” Bostian said. “I feel honored and humbled that (Northwestern State President) Dr. (Marcus) Jones and (Vice President for External Affairs) Mr. (Jerry) Pierce have given me the opportunity to continue NSU’s strong athletic program. I look forward to working with our student-athletes, coaches and staff and the community of Natchitoches to support our student-athletes in their academic pursuits while winning conference championships and giving back to the community.”

Bostian brings an extensive background in athletic administration and fundraising at the collegiate level.

Throughout his nearly two-decade long career in college athletic administration, Bostian has consistently surpassed his goals and currently has UNCG on pace for its highest fundraising year in school history in the 2022 fiscal year. In his first year with the Spartans, UNCG athletics raised $1.8 million in funds for the department, surpassing their goal by 50 percent.

He also oversaw the UNCG athletics ticketing, marketing and promotions and athletics communications offices and was the sports administrator for the UNCG men’s basketball team, which won the Southern Conference regular-season and tournament championships and reached the NCAA Tournament.

In addition to his role in the external operations department, Bostian served as the interim athletic director at UNCG from September 2021 through earlier this month.

“We are elated that Kevin will be joining the university as athletic director,” Jones said. “He has impressive credentials and extensive experience in college athletics that will assist him in re-energizing NSU’s intercollegiate sports program and guiding it to new levels of success.

“He has a steadfast commitment to student-athletes and their accomplishments on and off the field, and Northwestern alumni, faculty and staff, and other stakeholders will appreciate his genuineness, enthusiasm, and spirit of collaboration. Kevin and his family will be a valuable addition to the university and community.”

Before coming to UNCG, Bostian was a major gifts officer at his alma mater, North Carolina State. As the officer in charge of gifts of more than $50,000, Bostian secured nearly $2.5 million in gifts in his 25 months with The Wolfpack Club.

Prior to his arrival at NC State, Bostian spent almost four years as Georgia Southern’s senior associate athletic director and executive director of the athletic foundation where he increased the athletic department’s revenue three straight years and helped cultivate a record number of donors four straight years. While at Georgia Southern, Bostian secured the second-largest cash gift in the department’s history and helped GSU push its athletic revenue to $3.909 million during the 2017 fiscal year.

A veteran of mid-major college athletics, Bostian spent more than three years at Tennessee Tech as its associate athletic director for development, serving as the department’s chief fundraiser. Bostian secured the largest gift in Tennessee Tech athletics history, maintained a portfolio of more than 200 donors and increased total donor revenue by 80 percent, total number of donors by more than 77 percent and total number of major gifts by 58 percent.

“Northwestern State University has hired an exceptional person in Kevin Bostian,” said Kyle Bowlsby, founder of Bowlsby Sports Advisors, which coordinated the search for Northwestern State. “He is a transformational leader who will maximize the student-athlete experience and position the athletic department for long-term success. Kevin rose quickly on our list of potential candidates as someone who is passionate and driven to make his mark on the intercollegiate athletics landscape.”

Bostian began his athletic administration career as a marketing specialist at South Alabama and spent a year as the sports marketing coordinator at the Gwinnett County Sports Commission in metro Atlanta.

He and his wife, Megan, have three children, Ayla, Zoe and Piper.