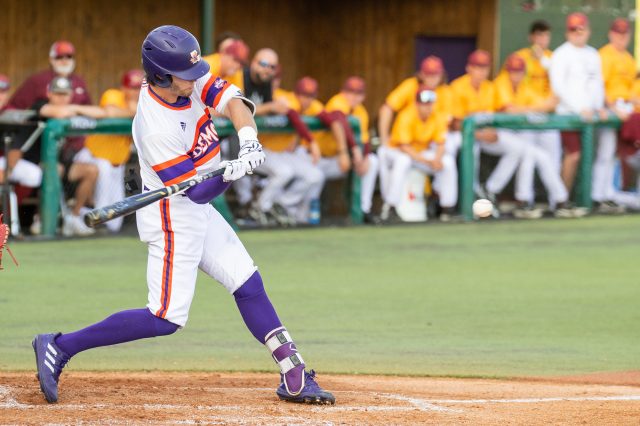 BATON ROUGE – With the Southland Conference Tournament just days away, the Northwestern State baseball team will have one final tune-up Tuesday night.

It comes in the form of state rival LSU, which hosts the Demons in NSU’s final mid-week game of the 2022 season at 6:30 p.m. at Alex Box Stadium. The game will stream live on SEC Network Plus and can be heard onwww.NSUDemons.com and through the Northwestern State Athletics mobile app, which can be downloaded free for Apple and Android devices.

In addition to facing a Power Five opponent for the first time since playing Nebraska on March 5, Tuesday’s game serves as a homecoming of sorts for several Demons, including senior center fielder Larson Fontenot and senior shortstop Cam Sibley.

Fontenot has been part of the back-to-back wins against the Tigers and was a member of the 2018 Demon team that was within two outs of eliminating the Tigers from the Corvallis Regional.

A season ago, Fontenot went 4-for-5 with a stolen base and an RBI as the Demons built a six-run lead in an eventual 7-3 win that came 28 miles from Fontenot’s hometown of St. Amant.

“It’s really nice going over there and playing at Alex Box, where you grew up watching them play,” Fontenot said. “It’s a good feeling to go play against them.”

Sibley had to wait almost two years into his NSU career to face LSU after the Panola College transfer saw his first Demon season cut short by the COVID-19 pandemic. He made his debut in the series a year ago more than a year after he planned to. The Demons’ 2020 date against LSU was set for April 28 before the pandemic shuttered the season 16 games into it.

Northwestern State will send right-hander Dawson Flowers (0-2, 4.88) to the mound while LSU has yet to name its starting pitcher.