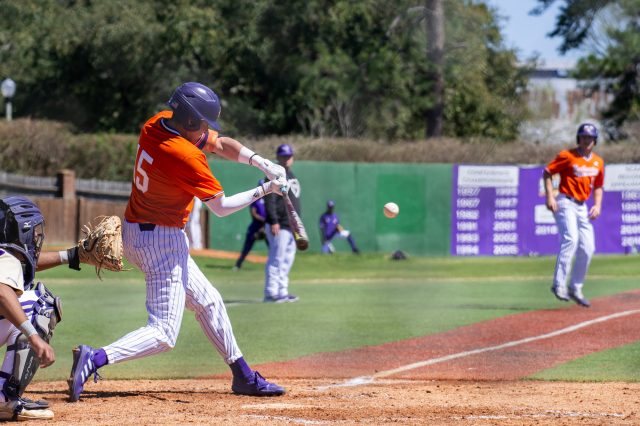 NATCHITOCHES – The Northwestern State baseball team took equal parts of its offense from the first two games of its series against Alcorn and rolled it together Sunday afternoon.

The result was a patient, productive approach that – coupled with another strong starting pitching performance — netted the Demons a 16-1 victory and a three-game sweep of the visiting Braves.

“That’s three or four weekends in a row where our starters have come out and set the tone,” sixth-year head coach Bobby Barbier said. “They pounded the zone with strikes and threw multiple pitches for strikes. That allows you to settle into a game. We’ve done that pretty much throughout the season.

“We got better today. We gave some good at-bats. We played pretty good defense. It was good to see us get better as the weekend went on.”

A sophomore right-hander from Nacogdoches, Texas, Brown threw one-hit shutout ball across those five innings to earn his first career win as a starter.

With Brown carving up the Braves (0-11), the Demons (6-9) did not have to worry about scoring in every at-bat as they did in Saturday’s doubleheader.

In that sweep, NSU drew a school-record 17 walks in the opener and pounded a season-high 14 hits in the nightcap.

Sunday’s victory was powered by a combination of those two approaches.  NSU posted double-figure walks for the third straight game, drawing 12 free passes and reached double figures in hits for the second straight game, tallying 11.

Jeffrey Elkins again was in the middle of the offense, drilling an opposite-field, three-run home run off Alcorn starter Jermel Ford (0-3) in the second inning. It was Elkins’ second three-run home run in as many games and part of a weekend in which the junior left fielder went 6-for-9 with two doubles, two home runs and 10 RBIs.

An inning later, former Airline star Cameron Parikh extended the lead with a two-out, bases-clearing double to right-center field that blew the game open as part of a four-run third inning.

“We had two outs, bases loaded, I was trying to see something I could put in right or right-center,” said Parikh, who drove in a career-high four runs. “I’ve been working with the coaches on staying up the middle, and I think I did that pretty well in that at-bat.”

NSU’s seven-run fourth inning put the game away as Elkins’ RBI single was the lone run-scoring hit in the inning. Cam Sibley, Gray Rowlett and Daunte Stuart drew bases-loaded walks while Parikh notched his career-best fourth RBI on a bases-loaded hit by pitch.

“It’s going to take all of us,” Barbier said. “We’ve got some guys who are pretty banged up, and it was good to get them some rest. Good for Cam (Parikh) to get in there. He hadn’t been in there all year long. He got in there in the opener and had some really good at-bats. Good to see Bryce get a couple of hits. Jeff had a big weekend with the home runs and RBIs. It’s good to see those guys get going. “

Northwestern State returns to action Tuesday night when they host Lamar in the fourth game of a nine-game homestand. First pitch is set for 6 p.m. at Brown-Stroud Field.