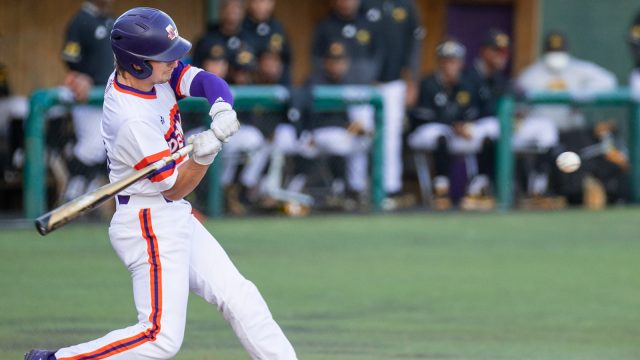 Parikh added another key hit to his growing resume while senior right-hander Josh Banes continued to capitalize on his chances as well, closing out the Demons’ 6-3 win against Grambling at Brown-Stroud Field.

“Their guy (starter Roy Peguero) did a good job early,” sixth-year head coach Bobby Barbier said. “We didn’t sting the ball very hard. Baylin (Sorensen) had one, and we couldn’t get him home. Jeff (Elkins) let us settle down a little bit. That’s important in these games. A lot of times you get uptight in mid-week games. You’ve got to settle down and play ball. I felt like we did that after that.”

“That” was Elkins’ leadoff home run in the sixth inning that awakened the Demons (10-11), who won for the seventh time in nine games on the homestand in which NSU scored 105 runs.

Down 2-1, Elkins slammed the first pitch he saw from left-handed reliever Michael Mims III (0-1) over the center-field wall to tie the game. Five batters later, Parikh capped the four-run inning with a two-run double to the right-field corner.

“We need to move the ball there,” Barbier said. “Just like he did with his sac fly (in the eighth). In those spots – we had runners out there a lot – we have to move the ball. He hit the ball to right field, and we had a little fortune that the right fielder misplayed it.”

Armed with a three-run lead, the Demons were able to tame the Tigers (7-14) thanks to some strong work out of the bullpen.

Andrew Cossio (1-0) earned his first career win after working the sixth inning while Alex Makarewich struck out a pair in a clean seventh inning. Dawson Flowers worked the eighth before Banes danced around a leadoff double in the ninth to hang a zero and earn a save in his second straight appearance after closing out Saturday’s 13-9 doubleheader finale against South Dakota State.

“I feel like I’ve taken advantage of the opportunities given to me,” Banes said. “We’ve got an electric arm in Cossio, and as soon as he gets back in his rhythm, that will probably be our closer. I’m just trying to take advantage of the outings I get. As a staff, we’re doing a good job of throwing really well when we get the chance. Coach Barbier says be ready every day, because that could be your chance. You might go a week without throwing, but you have to be ready when you get your opportunity.”

Banes could simply be following the path set forward by Parikh, who had started two games before the Demons’ nine-game homestand. After scoring four runs in a 20-3 win against Alcorn in the opener of March 12, Parikh has been a staple at the top of the Demon lineup.

Parikh’s three RBIs Wednesday gave him 12 on the season – 10 of which came on the homestand.

“I was thinking about that this week,” Banes said. “(Parikh) has been patient, patient, patient, waiting for his chance. He’s taken his opportunity and run with it, and I couldn’t be happier for him.”

The Demons return to action Friday when they travel to New Orleans for the Southland Conference-opening series against the Privateers. First pitch of the three-game series is set for 6:30 p.m. at Maestri Field.