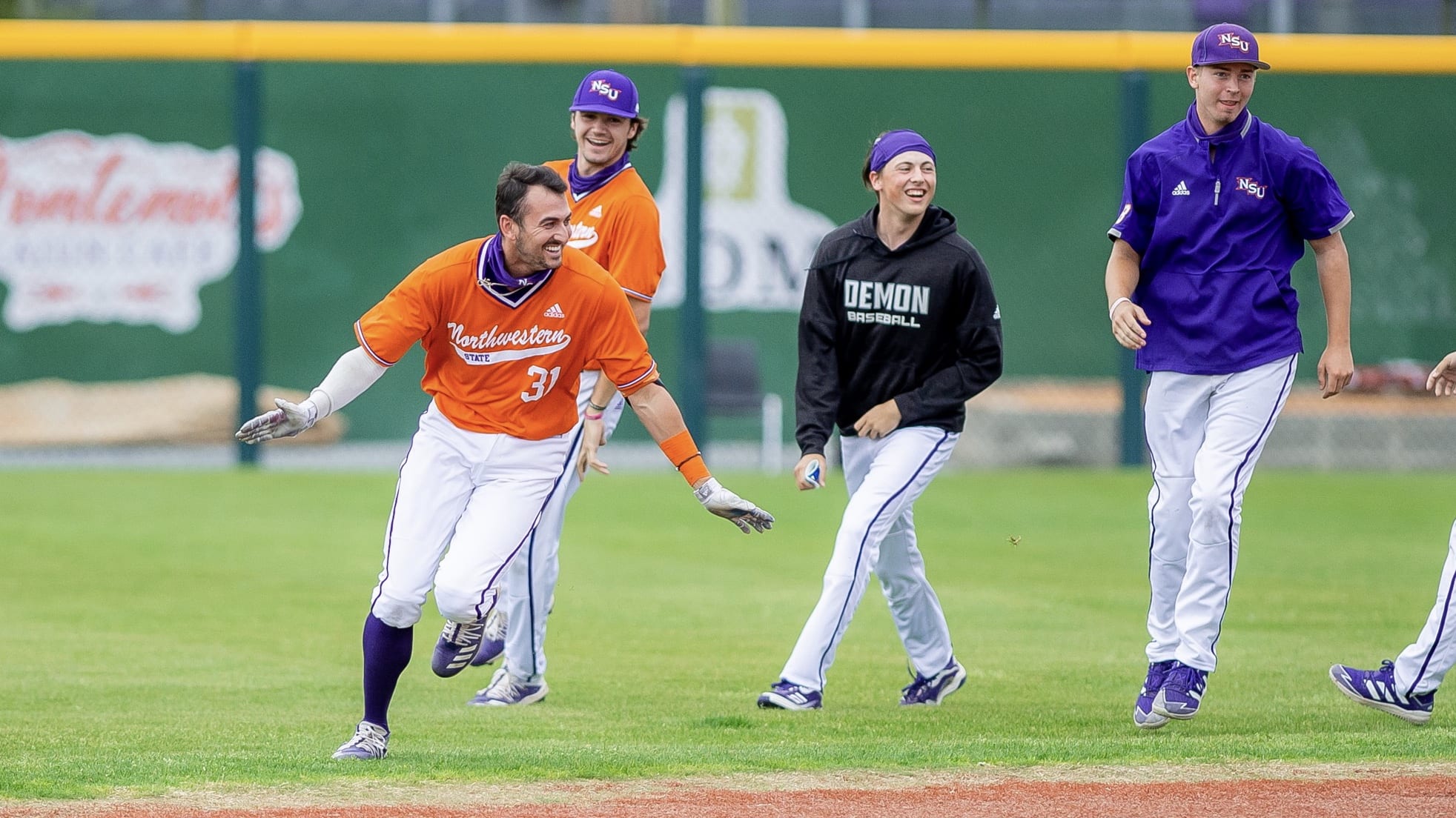 NATCHITOCHES – If Bobby Barbier wondered how his Northwestern State baseball team would respond to the four-game weekend series instituted by the Southland Conference this season, his Demons delivered a strong response Sunday.

Down by one entering the ninth inning, Northwestern State put together its lone multi-run inning of the game, scoring twice to rally past Incarnate Word for a 6-5 victory at Brown-Stroud Field.

The win allowed the Demons (7-7, 2-2) to split a four-game series in which all four games were decided by one run – three in the final at-bat.

“Four one-run games, two pretty evenly matched teams,” said Barbier, whose team captured its second walk-off victory of the season. “It showed that on the scoreboard. We’re very fortunate to come out with a win in the end. We scuffled early and didn’t play like I thought we should early in the game.”

Like each of the previous three games against UIW (5-4, 2-2), the outcome was in doubt until the final pitch.

It was former Airline star Cameron Parikh’s turn Sunday to turn that final pitch into a game-winner for the Demons, who capped their season-long, 10-game homestand with a celebration.

Parikh sent a slider from Steve Hayward (0-3) deep enough to right field for Cam Sibley to trot home with the winning run.

Three batters earlier, it was Sibley who brought the Demon fans to their feet, ripping a game-tying triple down the right field line to score Jeffrey Elkins, who was hit by a pitch with one out.

Sibley started the at-bat watching a pair of sliders find the outside corner for strikes before lashing his second RBI extra-base hit of the game.

“We’d seen that guy twice already this weekend, and we knew he was going to throw a lot of sliders,” said Sibley, who had an RBI double in the fourth inning to slice UIW’s two-run lead in half.

“I got in there and he throws back-to-back sliders, and I’m down 0-2. I was looking for it again, and he left it over the plate. I made a good swing on it and got the job done. I knew we were going to win the game at that point. I knew (Parikh) was going to do his job.”

After taking a 1-0 lead in the first inning, the Demons answered every Cardinals score with a run of their own. For most of the afternoon, the difference was the three-run fourth inning UIW put together against Josh Banes and Donovan Ohnoutka.

Sibley doubled home Elkins in the fourth to answer that three-run frame before the teams traded runs in the eighth inning.

Finally, in the ninth, the Demons scrapped together their lone multi-run inning of the game, making a winner of Evan Daigle (1-0), who worked 1 1-3 scoreless innings.

The Demons got production from a multitude of sources, especially the bottom of the order.

Elkins (2-for-3, 3 runs) and Sibley (2-for-4, 2 RBIs) were strong out of the eighth and ninth spots in the order and Daunte Stuart added three hits and an RBI. Parikh entered the game as a pinch hitter in the eighth inning and drove Stuart with a groundout before earning the Demons a series split with his sac fly.

“It was good to see a guy like Cameron Parikh do that,” Barbier said. “He’s a guy who has played a lot early this season, and he’s sat by me for the last three games. He didn’t pout at all. He came in and got two RBIs. It’s good to see that in the dugout, and guys get rewarded when they do things the right way.”

The Demons return to action Friday when they open their first Southland Conference road series of the season at Sam Houston. First pitch is set for 6:30 p.m. in Huntsville, Texas.

Cameron made plate appearances in three games and had three hits, including a double. Cole had two hits.

Former Airline standout Cameron Taylor pitched 2/3 of an inning in the Game 1 victory, allowing one hit.

Another former standout, Peyton Davis, had a hit in Game 1 as did Parikh.