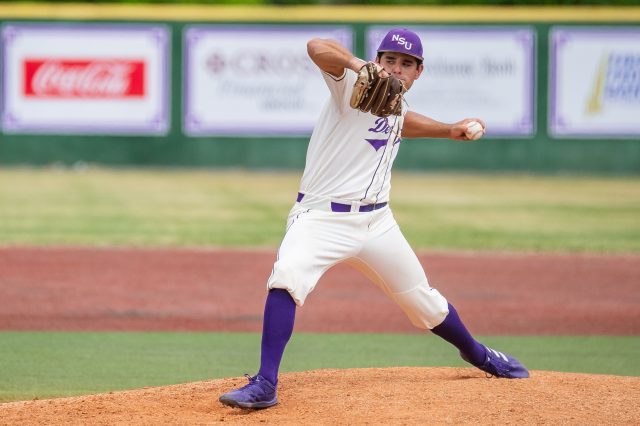 NATCHITOCHES – Northwestern State baseball coach Bobby Barbier said this past weekend he spent a lot of time discussing the 2018 Demons with his current squad.

Three players and one assistant coach did not have to hear those stories because they were part that Demon team, the first to take home a Southland Conference Baseball Tournament championship.

Pitchers Donovan Ohnoutka and former Airline star Cameron Taylor along with center fielder Larson Fontenot have a chance to bookend their Northwestern State careers with another ring as the Demons open a three-game series against New Orleans at 6:30 p.m. Thursday at Brown-Stroud Field.

The series also includes a 6:30 p.m. Friday game and a 1 p.m. Senior Day Saturday start. Free streaming audio and subscription video will be available for all three games on www.NSUDemons.com and through the Northwestern State Athletics mobile app, which can be downloaded free for Apple and Android devices.

To say that Taylor, a former All-Parish MVP, has faced some challenges during his college career would be an understatement.

“If (Taylor as a freshman) would have known the position he’s in now, he’d be very happy, especially with all I’ve been through. Finally getting my velo(city) up. Finally being able to contribute to the team. Going through Tommy John surgery then double hip surgery. Pitching off one hip for a year. I’m pretty happy with the way it’s turned out. Obviously, I’m never satisfied but pretty happy.”

Taylor and Ohnoutka were redshirt freshmen on the 2018 team that went to New Orleans and took two of three games from the Privateers ahead of the conference tournament.

Now sixth-year seniors, the pair have put together some of their best work of the season down the stretch, looking to cap long and winding careers with a second ring.

“Both Donovan and Cameron are pitching as well right now as they have in their careers,” Barbier said. “It’s nice to see that, at the end, they’re pitching their best.

“Larson’s such a great story, too. He’s a guy who walked on and made himself a player. He was a first baseman in high school and has been a starting Division I center fielder for the past couple of years. All three of those guys have really helped shape what NSU baseball is.”

NSU can clinch a share of the Southland Conference regular-season title with a sweep and a combination of results from the Southeastern-Nicholls and McNeese-Houston Baptist series.

Following this weekend’s series, the top two teams in the conference standings will host the two four-team brackets ahead of the May 26-28 Southland Conference Tournament championship series.

Much like a season ago, the final weekend holds myriad possibilities for the Demons, who can win the league outright or fall to the No. 7 seed in the eight-team league.

“It’s exciting going into the last weekend playing for a championship,” said Barbier, who was a player on NSU’s 2005 regular-season conference championship team. “It’s something we shouldn’t take for granted.

“We should enjoy it but also understand what’s at stake. We need to go out and play really, really hard. When we have these big weekends or big games, we talk about playing hard and wherever it falls, it falls.”

With just eight teams in the conference this season, every series this weekend is a rematch of the opening week of conference play. Northwestern State took two of three games from New Orleans at Maestri Field from March 25-27 as part of a 5-1 start in conference play.

“You take bits and pieces,” Ohnoutka said of what carries over from the series seven weeks ago. “You take what went well and build on that. You take what didn’t go well and prepare for that in practice.”

That trio will be joined by pitchers Josh Banes and former Benton star Will Hine, infielders Cam Sibley and Bryce Holmes and catcher Austin Kirkpatrick in the Demon baseball senior class of 2022, who will be honored ahead of Saturday’s series finale.

“It’s been a long ride,” Ohnoutka said. “I’ve learned to stick with it. Consistency is key. You have to come every day with the same mentality. If the first day you came in and didn’t do well, it doesn’t mean the next day has to be the same.”