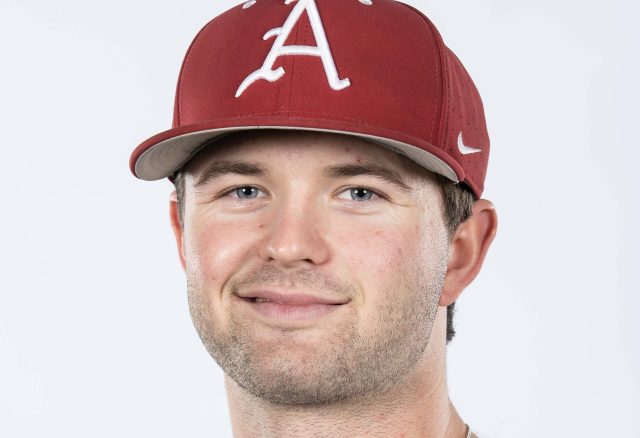 Former Haughton star Peyton Stovall and the Arkansas Razorbacks are heading to the College World Series.

Stovall, a freshman first baseman, scored the winning run in the bottom of the ninth and went 3-for-4 in a 4-3 victory over host North Carolina in the NCAA Division I Tournament’s Chapel Hill Super Regional on Sunday.

The victory completed a two-game sweep in the best-of-3 series. The Razorbacks won Game 1 4-1 Saturday.

Stovall posted this on Twitter soon after the victory. “THIS TEAM!! Living a dream playing with this group of men!! Proud is an understatement for @RazorbackBSB!!”

Jalen Battles led off the bottom of the ninth with a single. Stovall followed with a single, advancing Battles to third.

“Peyton Stovall, he’s on fire right now,” Arkansas Head Coach Dave Van Horn said in his postgame press conference. “The only out he made he hit the ball hard to second base. What a great at-bat, slashing one into the gap, first and third nobody out. We felt like we were going to win the game.”

Battles, Slavens and Michael Turner all had two hits. Arkansas starter Will McEntire allowed three hits and no runs in 5 2/3 innings. Five relievers completed the game.

Stovall had a two-out single that loaded the bases in the second but the Razorbacks couldn’t take advantage. He had a leadoff single in the seventh but was stranded at second.

He also made an outstanding catch in next to the Arkansas dugout for the third out in the sixth with runners at first and second.