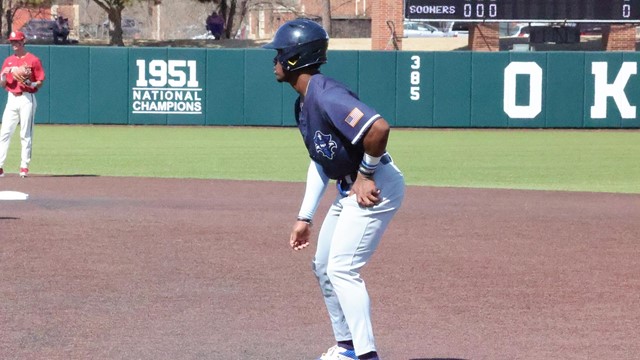 Larry has been a major catalyst for the Privateer offense which hit .314 over four games against South Alabama and Oklahoma. The Privateers also cranked out 29 runs in three games against the Sooners in L. Dale Mitchell Park.

Larry went 9-for-20 (.450) with nine RBI and two stolen bases on the week. He was a major factor in the Privateers comeback win on Friday against Oklahoma which helped set the stage for the Privateers to win the series in Norman, an accomplishment they reached on Sunday.

Larry drove in six of the Privateers’ 10 runs in Friday’s comeback victory. In the ninth inning, his single brought in two runs that trimmed the Oklahoma advantage to 6-5. Then in extras, Larry provided insurance for the Privateers as he doubled to drive in two, extending the New Orleans lead to 10-7.

For the season, Larry is hitting .370, which ranks fifth in the Southland. He also leads the conference in RBI with 22 and is second in runs scored (21). Larry also currently ranks inside the top 10 in the Southland in slugging percentage, stolen bases and home runs.

Amani becomes the third Privateer to win the conference’s weekly award this season. He joins Pearce Howard and Collin Horton who have won previous Southland Players of the Week honors in 2022.