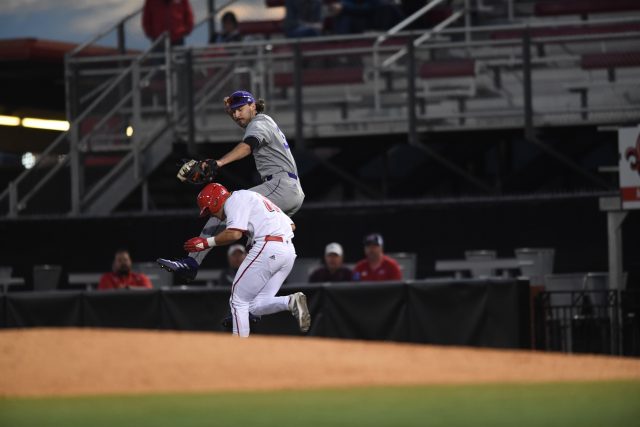 For the second straight night, the Demons were unable to convert on those chances, falling 6-3 to the Ragin’ Cajuns at M.L. “Tigue” Moore Field.

“We have to continue to get better,” sixth-year head coach Bobby Barbier said. “They did a great job capitalizing on our mistakes. We have to learn from them and continue to improve.”

A four-run third inning by the Cajuns (5-4) highlighted by Carson Roccaforte’s two-run single put the Demons (3-5) behind, and a cavalcade of ULL relievers made the early advantage stand up.

The Demons were able to put together a three-run fifth inning against Cooper Rawls, cutting the lead to one.

For the second straight game, it was Bo Willis who came up with the key hit.

After the Demons loaded the bases and scratched out their first run on a hit by pitch drawn by Gray Rowlett, Willis lined a two-run single to left field, slicing the lead to one and giving Willis nine RBIs in the two-game series.

Rawls wiggled out of further trouble by getting a groundout to second.

The Cajuns answered with a run in their half of the fifth, and from there, the Demons were unable to capitalize on a couple of late-inning chances.

NSU put its first two runners on in the seventh inning on a Cam Sibley walk and a Larson Fontenot bunt single. However, reliever Chipper Menard struck out the next three Demons.

Bryce Holmes led off the eighth inning with an opposite-field double but never advanced past second base. In all, the Demons put their leadoff man on four times, scoring only after Miguel Vega’s leadoff double in the fifth.

Roccaforte took away the Demons’ last best chance in the ninth as he robbed Sibley of a home run on the first pitch the Demon shortstop saw from reliever Jacob Schultz. Roccaforte leaped at the right-field fence and took Sibley’s potential solo home run away, allowing Schultz to work a 1-2-3 inning for his second save in as many days.

The Demons return to action Friday when they face Nebraska at 11 a.m. in Arlington, Texas. NSU will play the Huskers twice before finishing the weekend with a 1 p.m. matchup against UT Arlington.