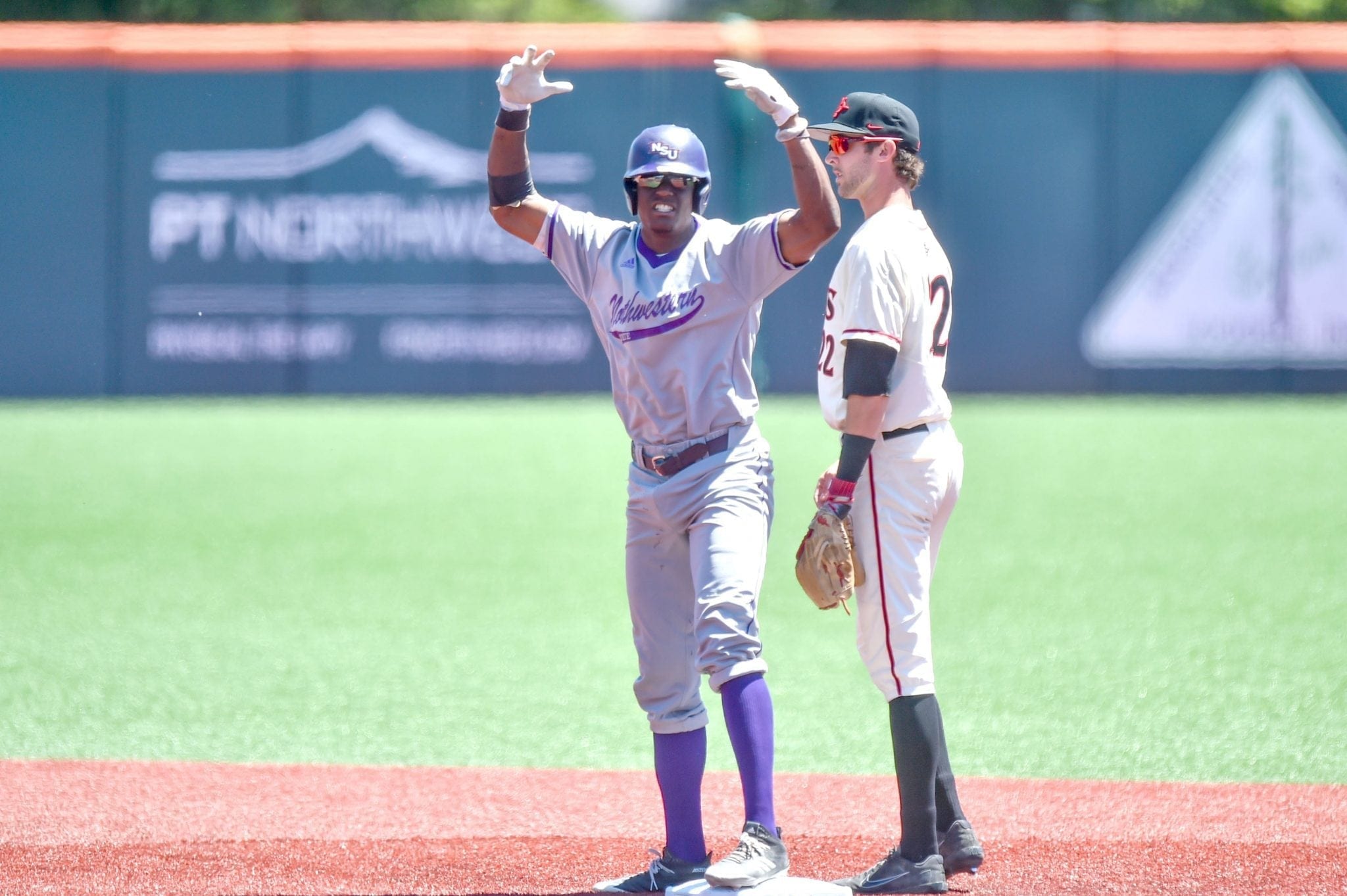 CORVALLIS, Oregon – To keep its season alive, the Northwestern State baseball team proved Saturdays are for the Demons.

Less than 16 hours after seeing hard-hit ball after hard-hit ball go for naught, Northwestern State’s offense made up for that tough luck by roughing up San Diego State, 9-0, on Saturday afternoon, eliminating the Aztecs from the Corvallis Regional.

The Demons will face the loser of Saturday’s matchup between LSU and No. 3 national seed Oregon State in a 2 p.m. CDT elimination game Sunday.

“It feels amazing,” said senior center fielder Kwan Adkins, who went 3-for-6 with a two-run, eighth-inning home run. “Everybody on that bus can attest to it. This is what we talked about all season, going out and making history.”

Thanks to a gutty, scoreless six-inning start from right-hander Jerry Maddox, Northwestern State (38-23) extended its run of Saturday success, winning a game on Saturday for the 16th time in 16 Saturdays this season.

Maddox (8-3) battled through 120 pitches in six-plus innings to start the first NCAA Regional shutout in school history. The nine-run margin of victory also was the Demons’ largest in its three regional wins and the largest margin of victory by a Southland Conference school in the NCAA Tournament.

After a scoreless first inning, Maddox stranded two runners in each of the next two innings while the Demons built a 4-0 lead thanks to Tyler Smith.

Smith singled home Adkins, who led off with a double, in the first and followed singles by Adkins and David Fry with a three-run, third-inning home run off Mountain West Conference Co-Pitcher of the Year Garrett Hill (7-3).

“(Hitting coach Taylor) Dugas has been helping me with a bunch of stuff,” Smith said. “I’ve been struggling lately, but we made small adjustments and it paid off. You have a little more confidence when a pitcher fills up in the zone. He’s not all over the place. You get on the first pitch and get after it.”

Hill lasted just three innings as the Demons tagged him for six hits and four runs (all earned).

Maddox, meanwhile, danced around four walks in six innings by allowing just three hits, marking the third time this season he has pitched at least six scoreless innings in a start.

Two of those walks came with two outs in the second and another came with a man on and one out in the third. Maddox was able to escape those jams unscathed thanks to a couple of fly-ball outs.

“Jerry’s been doing it for the past month,” Barbier said. “He’s fought through it until he finds a bit of a groove. It’s almost more satisfying than when he has his best stuff, because it shows what we’re about, not dying, not giving in.”

Maddox found a bit of a groove in the middle innings, retiring seven straight between the third and fifth innings before David Hensley led off the sixth inning with an opposite-field double. He allowed just three hits and struck out four in his six scoreless innings.

The Aztecs (39-21) loaded the bases with one out before Maddox induced Julian Escobedo to hit into a 4-6-3, inning-ending double play.

“My breaking was working for me today,” Maddox said. “It got me going when it needed to. The biggest thing was the hitters coming through more than you can ask for. You get a four- or five-run lead, especially a nine-run lead, it takes a toll on the other team, especially being in an elimination game.”

Buoyed by the momentum of that pivotal sixth-inning double play, the Demons poured it on late.

J.P. Lagreco’s two-run double in the seventh inning extended the lead and Adkins put a cap on the scoring with a mammoth, two-run shot over the right-field bleachers.

Adkins, Smith and Peyton Davis (3-for-3, two walks) all had three hits for the Demons, who have not lost back-to-back games since March 29-30 at Central Arkansas.

“Nobody wanted this to be our last game,” Adkins said. “Our backs are against the wall, and we’re going to keep fighting.”