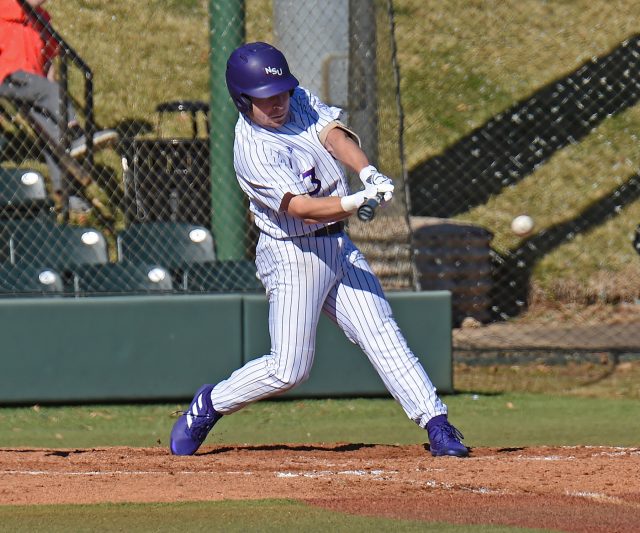 Broch Holmes’ two-run single highlighted a three-run eighth inning as the Demons rallied past Oklahoma, 4-2, at Globe Life Field in the opener of a three-game non-conference series.

“That says a lot about our team,” sixth-year head coach Bobby Barbier said. “Their left-hander (starter Jake Bennett) was phenomenal. He can break your spirit. He was throwing fastballs by us. It’s a good fastball. He’s commanding the heck out of it. (Associate head) Coach (Chris) Bert(rand) talked about it before the game. Keep punching. No matter what’s going on in the game, keep going.”

Bennett smothered the Demon offense for most of his 6 1-3 innings, striking out 11 and not allowing a hit until Bo Willis’ two-out single in the fifth inning.

Oklahoma coach Skip Johnson removed Bennett after facing one batter in the seventh, allowing the Demons (3-1) to pounce on the Sooners’ bullpen.

Willis delivered his second key hit of the game – a two-out RBI single – to score pinch runner Cameron Parikh to tie the game at 1 in the seventh, setting the stage for a wild next two-plus innings.

Willis was in position to deliver a game-tying hit because of a quality start from left-hander Cal Carver and a Demon defense that turned away several premium scoring chances for the Sooners (3-2).

Carver got a line-drive double play to third baseman Bryce Holmes to end the third inning, one batter after Blake Robertson’s RBI triple put the Sooners up 1-0. An inning later with the Demons having pulled the infield in, Daunte Stuart charged a short-hop grounder and threw out a runner at the plate to keep the deficit at one.

Carver walked the first two batters of the seventh inning before Dawson Flowers entered and walked the next two, putting Oklahoma back ahead 2-1.

Former Airline star Cameron Taylor (1-0) quelled the threat, getting the next three hitters to keep the Sooners from breaking open the game.

“Cal did a great job keeping us there,” Barbier said. “We ran into a little trouble, and Cameron did a phenomenal job keeping it small and giving us a chance.”

The Demons built on the momentum from Taylor’s great escape with Larson Fontenot’s second infield single of the game starting a run of five straight NSU hitters to reach base.

Broch Holmes had the biggest moment in the very busy inning, lining a two-run single to right center that gave the Demons their first lead of the game – one they would not relinquish.

“My teammates backed me up,” Holmes said. “They kept saying, ‘Next AB, next AB. Keep putting good swings on it, and it will come for you.’ When they made the pitching change, Bert said something to me that boosted my confidence, and I felt more comfortable that at-bat. I told my brother, ‘Something big’s about to happen here.’”

Parikh’s RBI fielder’s choice gave the Demons a two-run lead before NSU turned the ball over to Andrew Cossio.

The junior right-hander opened his outing by pumping mid-90s fastballs against the Sooners, retiring the first two before Oklahoma used consecutive singles to put runners on second and third.

Cossio’s answer? A slider to freeze pinch hitter Brett Squires for the final out and maintain NSU’s two-run advantage.

Cossio made another escape in the ninth to complete his first career save. After hitting two Sooners to open the inning, Cossio went back to his slider and got a three-pitch strikeout and a ground out to strand runners on second and third and lift the Demons to their third straight win against a Power Five opponent.

“Really just catching my breath, starting over and looking at Bo’s chest protector the whole time, regardless of where the ball was going,” Cossio said of what settled him down. “Once I started losing the feel for my fastball, I just tried to hit his left shoulder with my slider.”

Added Barbier: “He’s a special arm. He’s worked his tail off to get to where he is right now. This success has come after he put in the work. He sat and waited for a while. That’s good for our young guys and our guys who haven’t gotten that many opportunities to see. That guy used to be the 12thguy on the list to come in, and now he’s the guy you want to come in with the game on the line.”