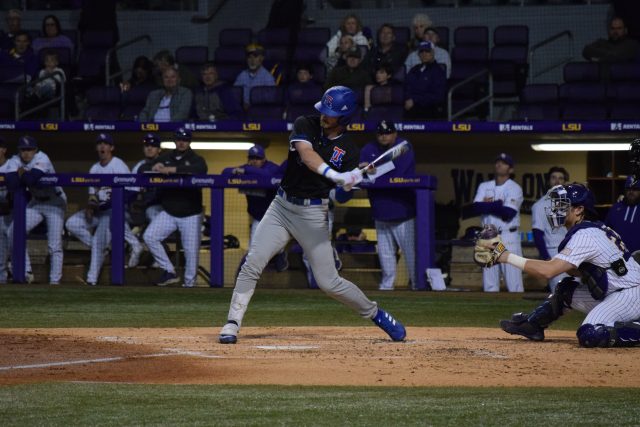 LA Tech (15-6, 2-1 C-USA) jumped out of the gates with a three-run first inning. Taylor Young led off with a hard-hit single to center extending his on-base streak to 15 and has now reached base safely in 20 of the 21 games so far. Cole McConnell followed up with his fifth double of the season. Jorge Corona brought in the first run with a single and then a 2-run triple from Adarius Myers to make it 3-0.

The Bulldogs tallied one more in the second on a sacrifice fly from Steele Netterville.

Greg Martinez made his second start and was dominant through the first four innings striking out six. The right-hander held the Tigers scoreless until facing trouble in the fifth. Martinez went 4.1 innings and giving up four earned runs all coming in the fifth inning.

LA Tech manufactured two runs in the top of the ninth to tie the game at 6-6. The Bulldogs were able to scratch two runs from an error and three walks. The offense was hitless from the second inning with no outs until Young hit a double down the left field line in the 11th.

In the 12th, Jackson Lancaster came up with one-out smashing a double over the centerfielders head to make a little noise. Bryce Wallace worked a seven-pitch walk. Riggs Easterling then worked a walk. And Taylor Young with the bases loaded managed a walk after going down in the count 0-2. This walk brought home Lancaster and turned out to be the game-winner.

Kyle Crigger was once again phenomenal. Crigger threw four innings earning the win in extra innings. The Bulldog closer racked up eight strikeouts and snuck out of a second and third one-out jam in the 12th  to end the game. In two appearances against LSU this year Crigger has totaled five innings, no runs, no walks and 10 punchouts.

LSU’s (15-6, 1-2 SEC) Tre’ Morgan led the Tiger offense going 3-for-5 with a 2-run double in the bottom of the fifth and an infield RBI single. The Tigers tallied four runs in the fifth to knot things back up.

“Our message to the team before the game was “compete”. Even if we lose the game I think we competed our tails off. We played harder than they did. I mean we had guys playing out of position. Thaxton Berch was playing second and he hasn’t taken a ground ball in five months. Riggs Easterling has never played third. They tried to run the squeeze play and Riggs (Easterling) runs down (Dylan) Crews and he may be the first pick. But that’s who we are. We are just a lot of guys competing our tails off. Very proud of our players.”

“We kind of went dead offensively between the third and the ninth. We really did not take good swings. There were a lot of punch outs tonight; 20 by both teams. There were some good arms out there too. When they took the lead, we could have easily cashed it in because we weren’t doing much. Taylor’s (Young) at-bat there at the end drawing a walk. I think people need to know too that when he rolled over on his hand in the field, it may have broken.”