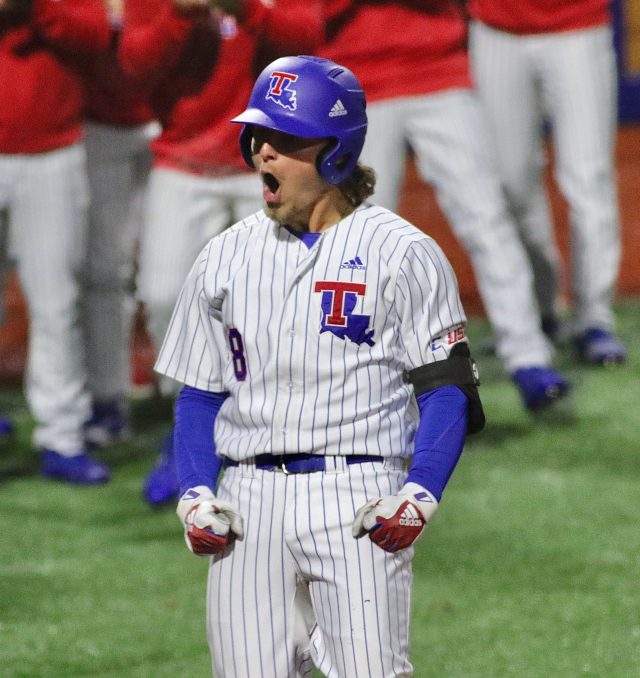 RUSTON — No. 15 Louisiana Tech captured a statement win against No. 2 LSU 11-6 Wednesday night at J.C. Love Field at Pat Patterson Park. Cade Gibson stole the show on the mound earning his first win of the 2022 season. LA Tech captures its fourth straight win to start their campaign.

LA Tech (4-0) starter, Cade Gibson, was lights out in his five innings of work Wednesday night. Gibson set a tone for the entire Bulldog squad by striking out eight Tiger batters, only one walk and just three hits.

The Bulldog bullpen maintained a lead once again. Ryan Jennings, Greg Martinez, and Kyle Crigger all contributed with crucial pitches to collect big outs late in the game.

LSU’s (3-1) pitching struggled early on allowing five runs through the first three innings. The offense could not string any big innings together to mount a comeback. Gavin Dugas led the Tiger bats going 2-for-3 at the plate, homering and bringing in three runs on the night.

The Tigers committed five errors in the field leading to many more opportunities for the Bulldog offense.

In the bottom of the third, Steele Netterville launched a leadoff solo home run for his first of the year.

LA Tech third baseman, Logan McLeod, had a great night at the plate and in the field with the sliding play. McLeod was 2-for-4 at the plate with two runs scored.

“I don’t know if I would have stayed out here the whole time if I wasn’t invested. Our fans came out, and not only did they show up, but they stayed the whole game. I can’t say enough about them.”

“Despite the bad conditions we had people out here at 3:30 getting ready and it was just electric. We always have a good crowd and are always supportive. I love them to death.”

“They (LSU) have great hitters. Coach Fouts had a great game plan going in. We were going to cross count with a bunch of stuff. If they were ahead, we were going to try to go offspeed and mix it up a lot so we couldn’t show any patterns.”