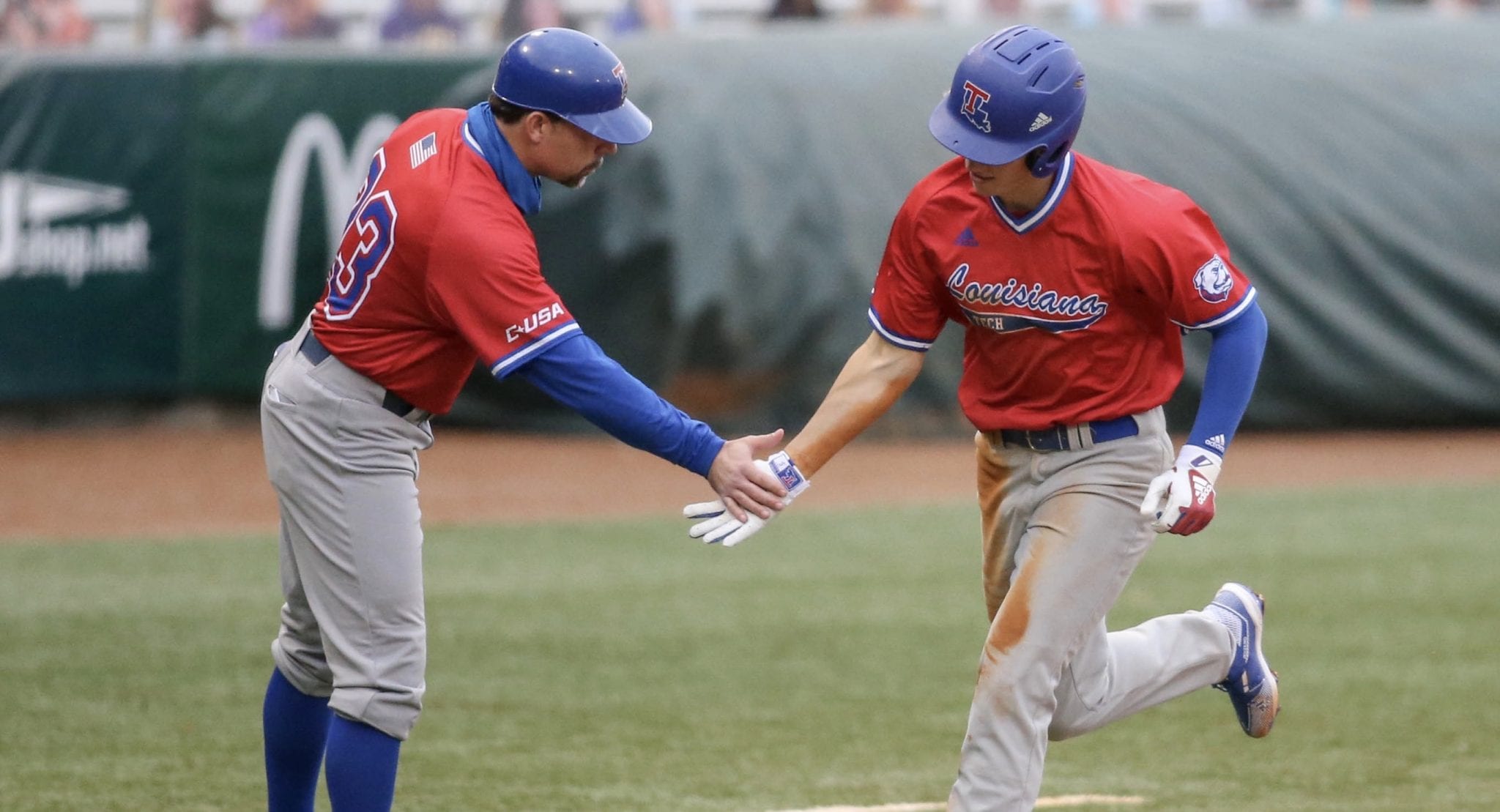 BATON ROUGE — In a game 348 days in the making, Louisiana Tech’s baseball team jumped all over Air Force to score its second most runs in a season opener in program history in an 18-1 Alex Box Stadium on Sunday.

LA Tech will return to Alex Box Stadium with a game against No. 7 LSU on Monday. First pitch for Monday night’s matchup is slated for 5 p.m. Bulldog Ryan Jennings will make his first start in a Louisiana Tech uniform after missing the 2020 season due to injury.

The Bulldogs (1-0) scored at least one run in five straight innings spanning from the second frame to the top half of the sixth, tallying 15 runs during the stretch to hold a 15-1 lead after six.

On the mound, left-hander Jonathan Fincher struck out 10 Falcons and allowed just two hits in five innings of work.

The Shreveport native’s 10 punchouts added to a team total of 16, making it the first time since a game against Northwestern State on Feb. 28, 2018, that the Diamond Dogs sat down 15 or more opposing batters on strikes. LA Tech pitchers also allowed just two free passes in an all-around dominant performance.

“I thought Fincher was great,” head coach Lane Burroughs said. “He ran into a little trouble in one inning, but he buckled down. That’s what aces do.

“Anytime you go 16 strikeouts over two walks, you have a good chance to win the ballgame. I’m very proud of him and all the relievers that came in. I’m very proud of our hitters. We had a great night hitting, but more importantly, the most impressive thing was that we didn’t make any errors.

“We talk about dominating the average plays, and we did tonight. That’s the first time all year we’ve played on regular grass and dirt, and I couldn’t be more pleased. It wasn’t just the doubles and homers tonight, we had quality at-bat after quality at-bat and really grinded their pitching staff down.”

Young’s two-run shot made it 6-1 Bulldogs before Netterville’s homer to left center extended Tech’s advantage to 9-1. Jorge Corona knocked in a run with an RBI groundout and Ben Brantley belted an RBI double over the left fielder’s head to push the lead to 11-1.

The ‘Dogs kept their foot on the gas in the fifth and sixth, which saw Taylor Young become the first Diamond Dog to tally a home run in back-to-back innings since Will Alvis accomplished the feat against Hawai’i on April 24, 2010. Young’s rocket over the left field wall extended Tech’s lead to 12-1.

Corona, Young and Parker Bates each registered an RBI single apiece in the sixth to make it 15-1 Bulldogs after the sixth. McConnell and Young each crossed home plate in the inning, finishing the game tied with a team-high four runs scored each.

With a healthy cushion, bullpen arms Cade Hodges, Landon Tomkins and Tanner Knight all made their LA Tech debuts in style, recording a hitless innings in the sixth, seventh and eighth innings, respectively. Senior Bryce Fagan tallied the final three outs with a pair of strikeouts in the ninth.

LA Tech scored its final three runs of the ballgame in the eighth. After an error at shortstop left runners on first and second, Bates punished the Falcons (1-2) with an RBI double to right center.

Tech’s Shemar Page drove in Kyle Crigger with a sacrifice fly for the 17th run before Philip Matulia singled to left field after working a seven-pitch at-bat to score Bates from second.

Page, Crigger and Matulia all entered the game later in the contest as the Bulldogs had all but one position player make an appearance in the game.

Five Bulldogs recorded a multi-hit game – Young and McConnell with three and Bates, Netterville and Matulia with two.