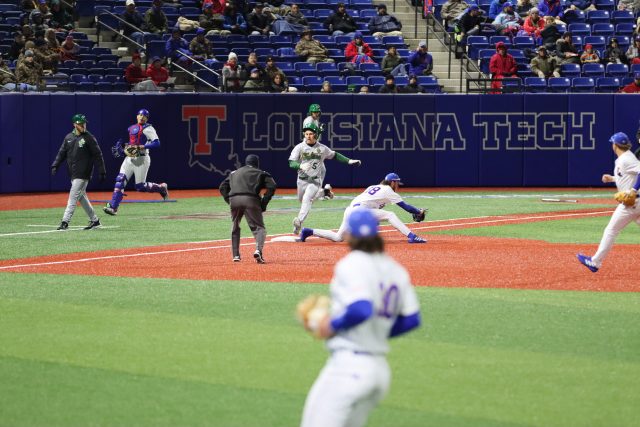 RUSTON — On a blistering cold Friday night, Louisiana Tech moved to 5-0 following a 6-1 win over Tulane at J.C. Love Field at Patterson Park. Louisiana Tech is 5-0 for the first time since 2017.

Jonathan Fincher earned the win, tossing 6.0 innings with eight strikeouts and only one earned run allowed. Fincher found himself in trouble in multiple innings, but managed to provide big strikeouts leaving a total of six runners stranded.

In the bottom of the third, LA Tech (5-0) center fielder, Cole McConnell, delivered a two-run double, splitting the gap in right center taking a 2-0 lead.

Tulane (4-1) answered back in the fourth tallying a run on a Jackson Finn two-out single.

Fincher settled in on the mound, striking out the side in the fifth inning.

The Bulldogs tacked on a four run seventh inning coming from a sac-fly from Jorge Corona, a wild pitch that brought home McConnell and a two-run home run from Adarius Myers (1).

Cade Hodges and Landon Tomkins combined for the final nine outs on Friday combining for five strikeouts and no runs.

“I feel like we are just having fun. We have a lot of guys and a lot of older guys. We just pick each other up no matter what. We had a lot of stranded base runners left on third base and I think we left the bases loaded one time. Coaches harp on that to not do that. We just did our thing late in the game and got it done.”

The Bulldogs look to move to 6-0 and clinch a series victory over the Green Wave at 2 p.m. at J.C. Love Field at Pat Patterson Park.