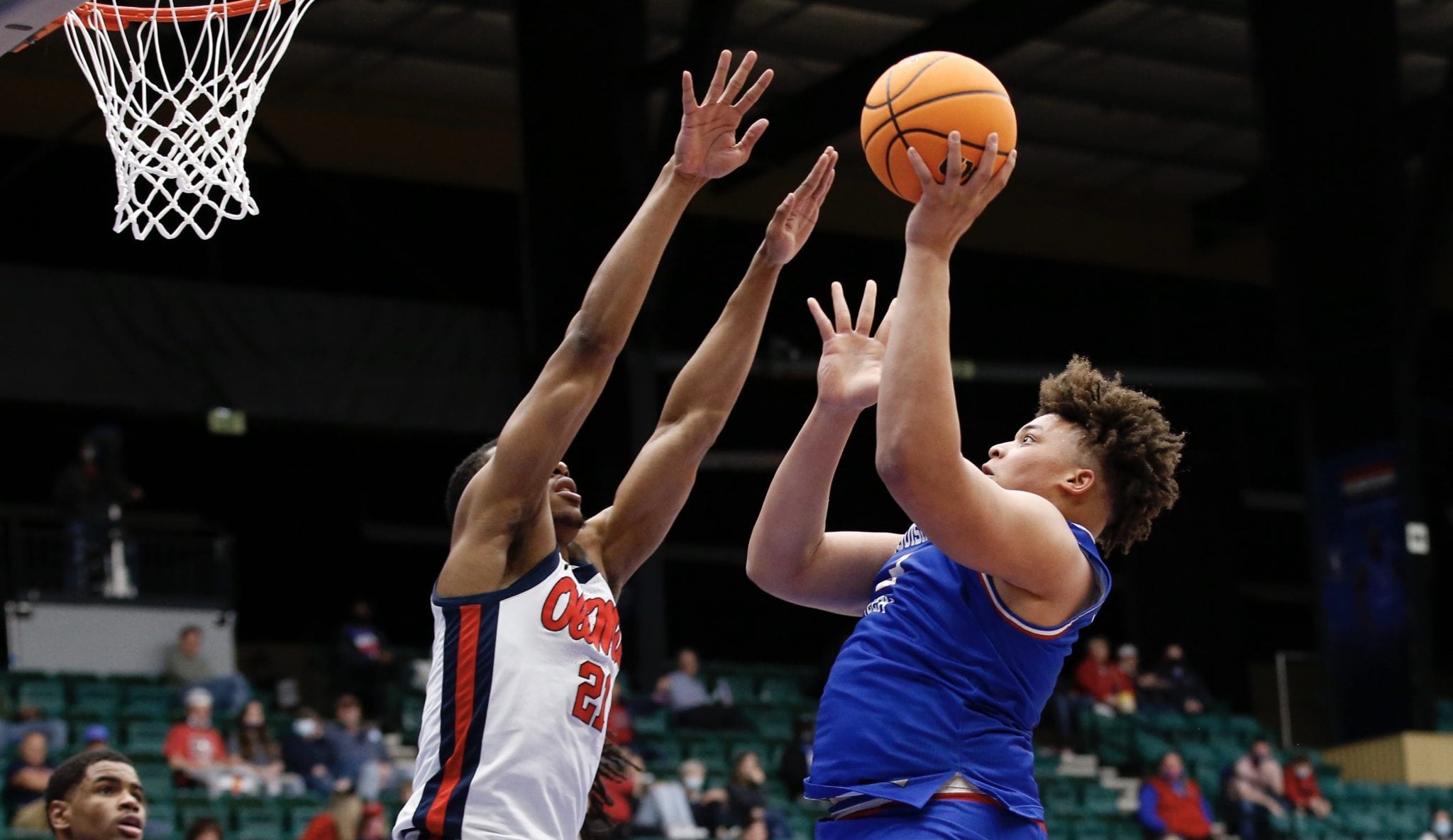 FRISCO, Texas – Louisiana Tech’s Kenneth Lofton Jr. had his coming out party at LSU early on in the regular season, notching his first collegiate double-double.

Apparently, the freshman likes playing SEC teams as he registered a career-high 22 points with seven rebounds to power the Bulldogs over Ole Miss, 70-61, on Friday night inside the Comerica Center in the first round of the National Invitation Tournament.

LA Tech (22-7) was locked in defensively for 30 minutes of the game.  There was that 10-minute stretch though in the first half that put them behind, 37-27, at halftime.

However, the ‘Dogs used a big second half to storm past the No. 1 seed, outscoring the Rebels 43-24 in the final 20 minutes, which included a massive 20-2 run.

“I told our team at halftime, we got into a weird place where our offensive struggles were affecting our defense,” said head coach Eric Konkol.  “We had to get back to being gritty and tough on the defensive end.  That is what we did in the second half.”

LA Tech controlled the first 10 minutes of the game, pulling out to an 18-8 lead while forcing two timeouts by Ole Miss (16-12).  At the time, the Bulldogs held the Rebels to just 3-of-11 shooting and forcing seven turnovers.

Ole Miss controlled the remainder of the first stanza though, making 11 of its next 17 field goals.  The Rebels made their final six shots before the half, including Jarkel Joiner’s three-pointer just before the buzzer to flip the 10-point deficit into a 10-point lead at the break.

After the two teams traded baskets in the first two minutes of the second half, the Bulldogs limited the Rebels to just two points over the over the next eight minutes.

Offensively during that stretch, LA Tech scored 20.  Lofton dropped 11 points and Amorie Archibald notched six. The big spark was Cobe Williams draining a three-pointer with one hand to help make it 49-41.

“They did not double team me, so it was my time to shine out there,” said Williams.  “I showed them what I have and what I can do.”

With his left hand still heavily taped due to a broken finger, the point guard drilled another three later on, but Ole Miss countered with a 5-0 run to slice its deficit down to three.

“Cobe is a special human being,” said Konkol.  “Last week during the conference tournament, that injury was still fresh and he did not know exactly what he could do.

“This week, he practiced all week and shot all week.  He figured out what he could do.  He is the engine, the heartbeat of this group and we saw a really gutsy performance from him and our team in the second half.”

Two free throws apiece from Archibald and Isaiah Crawford, followed by a three-point play from Kalob Ledoux, pushed the LA Tech advantage back out to 59-51 with 5:14 to go.  The Rebels fought back again, getting to within four on two separate occasions.

However, all Ole Miss could score in the final two minutes were two free throws.  On the flipside, LA Tech sank seven of its eight free throw attempts to seal the victory.  It is the second straight year the Bulldogs have defeated an SEC team and the seventh victory over a Power 5 team since 2013.  It was the first win over the Rebels since 1964.

Defense led the way for the Bulldogs.  They forced 21 turnovers, second most all season, and had a +11 turnover margin.  They also registered a season-high 15 steals (Crawford had four and Archibald and Williams each had three).

LA Tech shot 40.7 percent from the field (22-54) and made 22 of its 29 shots from the charity stripe for 75.9 percent.  Joining Lofton in double-figure scoring was Archibald who had 14 points and seven assists.  Ledoux also tallied 10.

LA Tech advances to the NIT quarterfinals to face C-USA foe Western Kentucky.  The matchup will take place on Thursday, March 25, at a time to be determined.