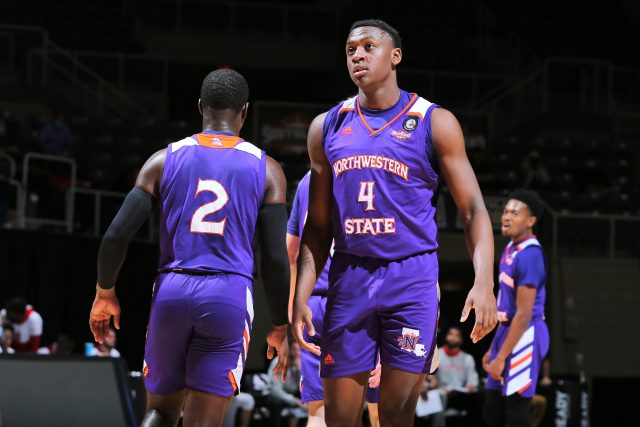 Tulsa staved off the NSU upset bid, fending off a furious Demon comeback attempt late in an 82-75 win.

Coleman’s 10 points in the final 7:46 kept NSU alive as he finished 10-of-15 from the field and added six rebounds and two blocks. The performance came on the heels of the freshman posting a then-career high on Tuesday with 19 points against Oklahoma.

“We competed really hard, even though at times we felt down about ourselves in some bad stretches,” Coleman said. “I’m making sure I get to my spot, taking smart shots and not take any bad shots.

“We hit the boards and got some offensive putbacks.”

Garrett scored a career-high 18 points including four 3-pointers. NSU shot 10-of-27 from deep after just making 3-of-17 at OU.

“This is just our second game playing all together, so once we get that bond and flow going, it’s going to  be a good season for us,” Garrett said. “We have to stay confident offensively, take the next-play mentality and believe in ourselves.

“We played with heart tonight, and we have to keep doing that on the defensive end.”

But the Hurricane made clutch shots of their own, seemingly every time NSU surged.

Tulsa’s Jeriah Horne led all scorers with 28 points on 8-of-12 shooting, including making all eight free throws. Two of those came with 12 seconds left to end NSU’s final push. Tulsa outscored NSU 18-5 from the free-throw line.

After NSU’s final lead, Tulsa retook the lead for good with a Sam Griffin 3-pointer (69-68) with 3:59 remaining, then quieted NSU’s momentum again when Coleman had a thunderous slam to cut Tulsa’s lead to 71-70. Griffin ended with 17 points.

Keyshawn Embery-Simpson collected a second-chance 3-pointer to stretch the lead to four points (2:01 left) as NSU never got closer than two again.

“We didn’t shut it down when Tulsa got up by 11, and we cut it down and actually took the lead,” said NSU coach Mike McConathy. “Tulsa coach Frank Haith does the best job of running their stuff of anybody in the country, but we competed defensively.

“We created some problems for them in the second half because of the way we guarded after they torched us in the first half. It was a great effort, and I felt like the team and the bench was locked in. We’ve got to execute every game like we executed down the stretch tonight.”

The Hurricane stretched its lead to 11 points twice in the second half, but junior guard Brian White had a hand in clawing the Demons back.

At the end of a five-minute Tulsa scoring drought, White connected on consecutive floaters at the end of the shot clock, the second of which tied the game at 65-65. It was part of an 11-0 run.

In the first half, NSU led by as much as seven points early (21-14) with a combined 11 points from Coleman and King.

But Tulsa ripped off a 19-3 run over six minutes. Horne scored nine of his 17 first-half points during that run as Tulsa led by as many as nine (33-24).

The Demons awoke from their offensive slumber, making five of their last eight 3-point attempts and finished the half with eight 3-pointers.

Garrett made all three of his treys in that stretch, shooting 3-of-4 to lead NSU with 11 points in the first half.

NSU is one of five Division I teams this season to play on the first two nights of the season, and just one of two teams to play road games in different cities. North Florida is the other, opening at Texas Tech before heading to Texas A&M.

The Demons return to Natchitoches on Saturday to open their home season against Champion Christian at 7:30 p.m.