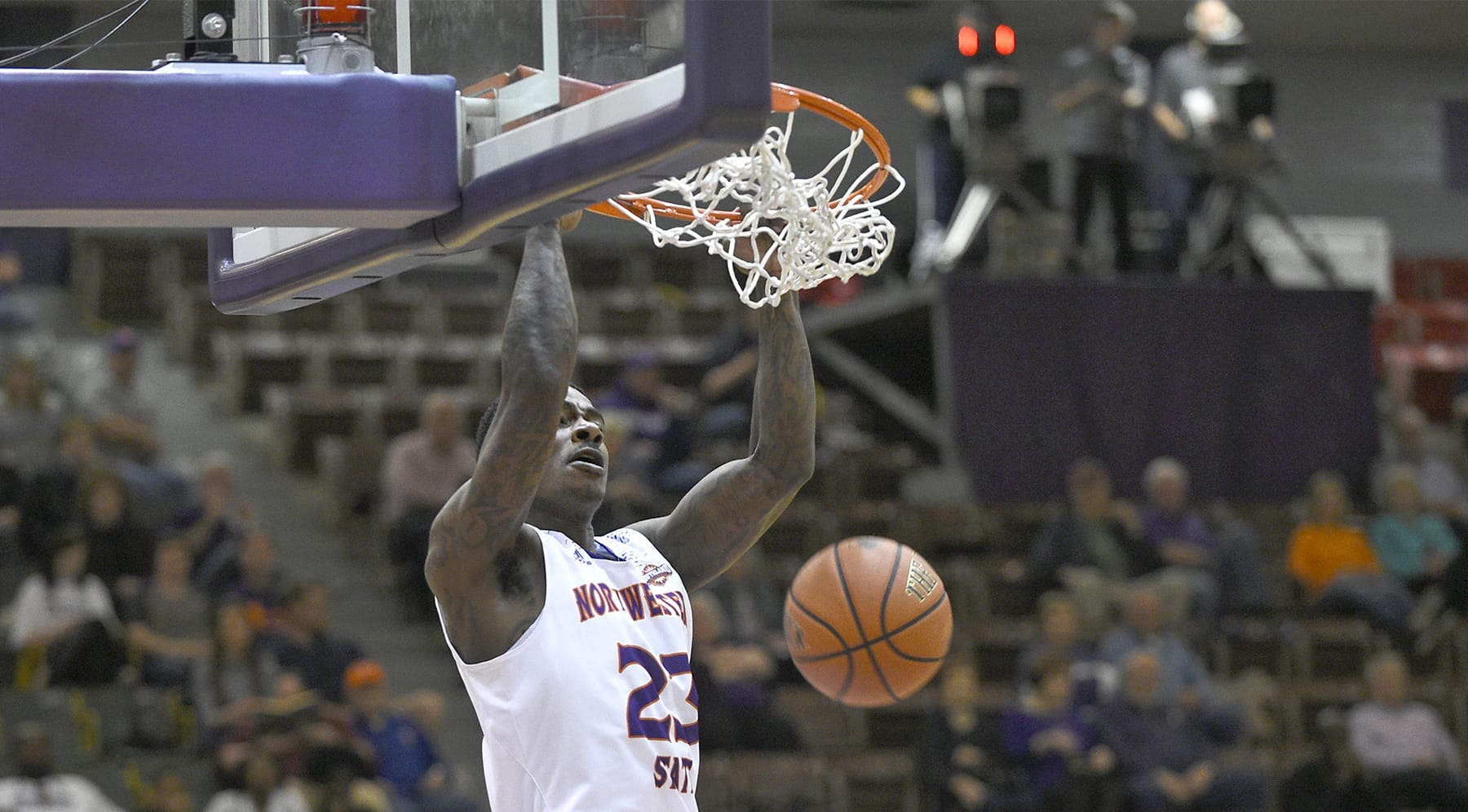 NATCHITOCHES – The pressure of designing a decisive play in the closing seconds of the game is familiar territory for Northwestern State basketball coach Mike McConathy and his staff.

They had no idea the same level of intensity would go into guiding the stretch run in the push to make Demons’ senior star Zeek Woodley the winner of the nationwide DarkHorseDunker.com contest.

Voting wraps up Friday at noon. The reward for the winner is an expense-paid trip to the Final Four and a spot in the March 30 State Farm Slam Dunk and 3-Point Championships televised on ESPN.

Votes can be cast daily at DarkHorseDunker.com from any hand-held device, I-pad, laptop or desktop computer.

Novices at election strategy, McConathy and his staff are leading a broad-based effort that reaches throughout the NSU campus and across the country to alumni and friends.

“We are so thankful to all the people who are pulling together to support Zeek,” said McConathy. “He had tough luck this season, having to miss 15 games with the injury, but he still was able to break our school scoring record. Winning the DarkHorseDunker.com contest and getting to compete on our sport’s biggest stage at the Final Four would be a great way to cap his college career.”

Through an ongoing torrent of texts, phone calls, e-mails and social media posts, the Demon basketball staff and many others at NSU, including acting President Dr. Chris Maggio, have successfully rounded up support to advance Woodley through three rounds in a contest that included 16 entries when it began Feb. 14.

There’s been a surge from his home. DeSoto Parish superintendent of schools Dr. Cade Brumley has helped generate votes along with friends, family members and the Mansfield Enterprise newspaper’s prominent coverage.

Woodley was the three-time Class C Outstanding Player at Pelican All-Saints High School, leading the Jaguars to state championships in his junior and senior seasons. His graduating class was the school’s last. Throughout his Demon career, dozens of family and friends have made the 40-minute trip to Prather Coliseum to cheer for that community’s last hero.

In his final game March 4, the fourth since he returned after being sidelined two months with a broken wrist, Woodley became the Demons’ career scoring leader, finishing with 2,033 points. His last two baskets were jumpers in the closing minutes, up against the shot clock, repelling a final push by Central Arkansas and icing a 14-point victory for NSU.

“That was truly something special, to have your last points in college lock down a win in what turned out to be your last game,” said McConathy. “Zeek’s been one of the most remarkable shooters and best scorers in college basketball. We’re hoping we can get in the spotlight one more time as a Demon.”