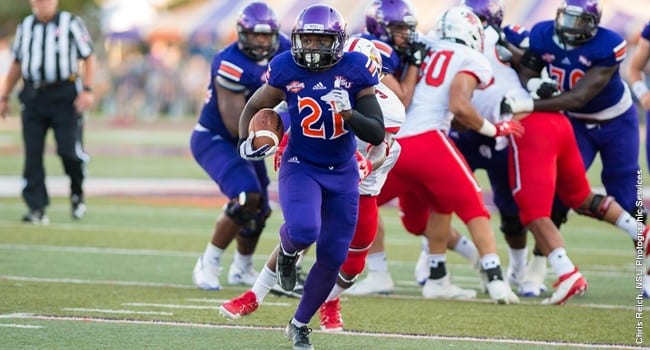 NATCHITOCHES – Northwestern State didn’t score many style points with its 35-28 triumph over Lamar in the Southland Conference football opener for both teams Saturday night, although the Demons showed an abundance of resolve, making the outcome all the more sweet to coach Jay Thomas.

NSU incurred a school-record tying 21 penalties and committed four turnovers, yet walked off with its first victory since last October, ending an eight-game string of frustration, five of those decided in the fourth quarter.

The most stinging of those defeats came last year at Lamar, when the Demons ran for 390 yards and were dominant until failing to convert a third-and-4 with three minutes remaining, up by 13. NSU punted and never held the ball again. The Cardinals mounted touchdown drives of 74 and 58 yards, sandwiched around an onside kick, scoring the game-winner with six seconds left on a fourth-down, 20-yard pass to pull off a 32-31 comeback.

There was a sense of déjà vu in Turpin Stadium coming down the stretch Saturday night.

NSU bolted to a 21-7 lead 16 minutes into play, weathered a Lamar rally into a 21-all tie early after halftime, then scored on two of its next three series to reopen a 14-point advantage with 14:18 remaining. The Cardinals drew within a touchdown with 8:51 remaining and moved to the Demons’ 38 in the final two minutes.

But on third and long with just over a minute to go, Demons cornerback Ike Warren, who missed last year’s game with an injured ankle, snatched his first interception this year and fourth in the last five games to salt away the win.

“We found a way to get it done,” said Thomas. “I’m proud of our defense, how they fought at the end to hold them off. Our offense did what was needed, we just turned it over too many times. Four turnovers, 21 penalties, mistakes of that amount won’t produce wins very often, but it worked out tonight because the guys kept working and believing in each other.”

It was the first conference season-opening win for the Demons since 2011.

“We overcame adversity. It was something we focused on this summer, and these guys put that into effect tonight,” said senior quarterback J.D. Almond, who threw a 25-yard TD to Jaylen Watson and ran for a 7-yard score. “It was good to see us overcome and adapt. We played hard on both sides of the ball and obviously we have a long ways to go as far as how we’re executing, but it was good to get the win tonight.”

The Purple Swarm defense recorded five sacks, 2.5 by junior end Obinna Iheoma. Nick Pierotti (12 tackles), Austin Balthazor (11) and Chrishard Buhl (10, plus a fumble recovery) along with Lyn Clark (3.5 tackles for lost yards) spearheaded the Swarm, which had 10 tackles for loss.

After faltering in the fourth quarter in season-opening non-conference losses at Louisiana Tech and Grambling, and coming off a 1-10 season in 2016, NSU made the most of the postgame celebration on the field with the Spirit of Northwestern Marching Band and cheerleaders.

“It’s a big shot in the arm. Our kids needed it really badly,” said Thomas. “They’ve worked so hard. They’ve got a lot of pride in our university. They want to win, not just for their parents and their brothers on the field, but they want to win for the Northwestern State community.

The Demons (1-2 overall, 1-0 in the Southland) head into their open date week, then stay at home to face Southeastern Louisiana (0-3, 0-1) on Saturday, Sept. 30, in a 6:30 contest set to be carried by Cox Sports Television and ESPN3 in areas where CST is not available on local cable systems.