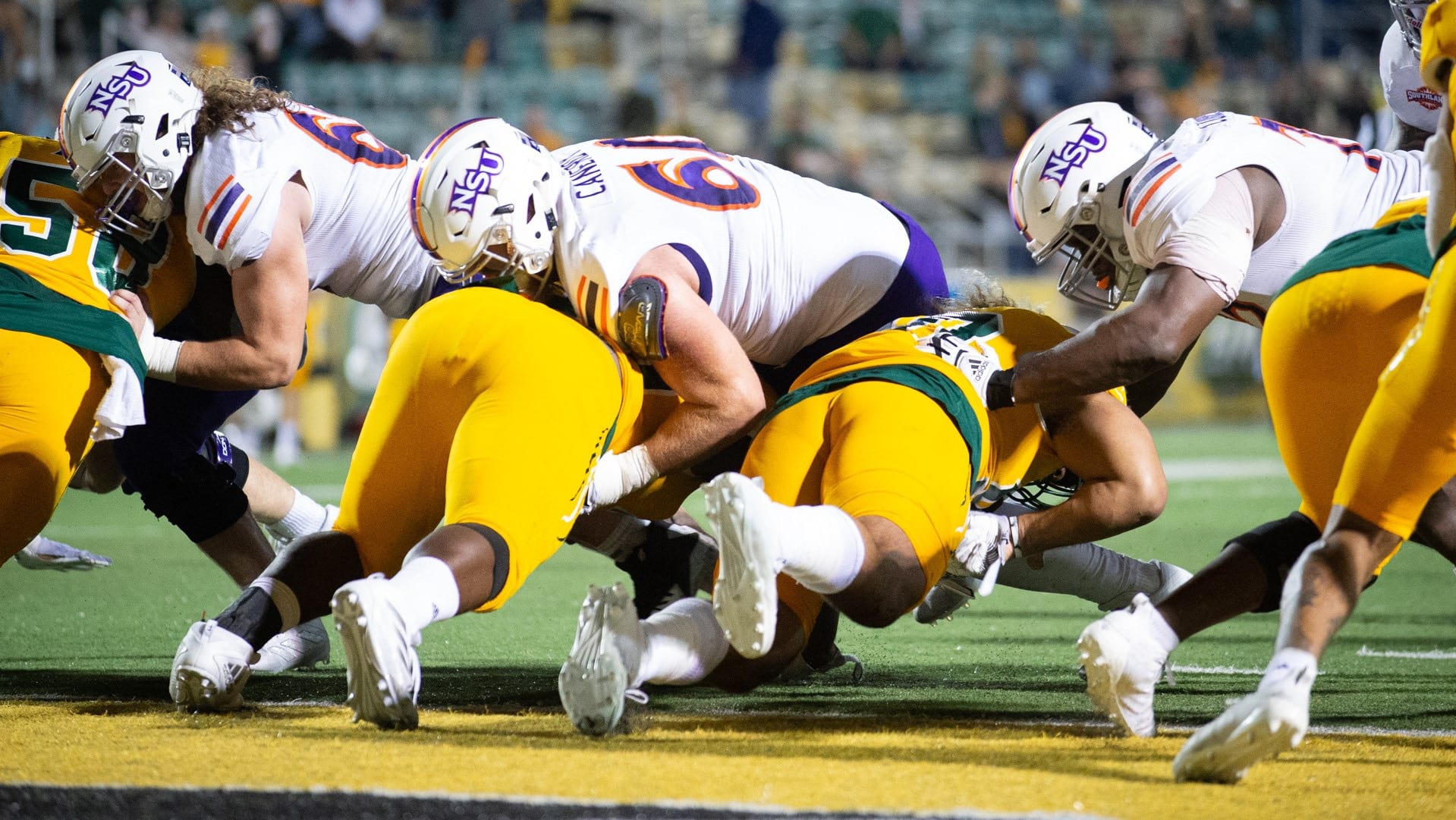 NATCHITOCHES – Rebounding from adversity is a common sports theme, one that the Northwestern State football team is living after dropping a pair of games to ranked teams by a combined 10 points this spring season.

But after having the 2020 fall football season taken away and waiting 471 days between competitions, the Demons (0-2, 0-2 Southland Conference) are appreciative of every opportunity to take the field.

Fans not in attendance in person can catch the radio broadcast on 94.9 FM The River, on television at Cox Sports or on streaming at ESPN+.

“We absolutely know that every game is a blessing,” said senior linebacker Blake Stephenson, who played just four games of the 2019 season because of a shoulder injury before the COVID-19 pandemic hit. “We’ve fought hard these past two games, and it hasn’t come out in our favor.

“But we know we have to control what we can control, keep fighting and the ball will swing in our direction at some point. You never know when this game is going to get taken away … and we know that we’ve come out and played hard and physical in these first two games and will continue to do so.”

After losing to then-No. 7 Nicholls by a touchdown in the home opener, the Demons dropped a heartbreaker at then-No. 18 Southeastern this past week, 27-24, in which NSU didn’t trail until the final two seconds.

Laird also came away with another impression after soaking in NSU’s first two games this spring – the Demons are a good football team.

“We went into both games knowing it was going to be about us,” said Laird, who is in his third season as head coach in Natchitoches. “We didn’t know exactly who we were in Week 1 … but we’ve learned that this game is about inches and seconds and making sure we realize that the little things matter.

“We’re playing extremely hard and physical, and we want to get a check in the win column. These kids deserve that, and if we keep doing the things we’re doing, we’ll get it.”

NSU has two wins against ranked opponents in Laird’s head coaching tenure, including a 2018 win against then-No. 18 McNeese in the last meeting in Turpin – a 37-34 double-overtime decision. The Demons blocked a potential game-winning field goal to force the second overtime before Shelton Eppler found Jazz Ferguson for the winning touchdown.

That win snapped a 13-game winning streak for McNeese in the series, and NSU wants to stop another streak before it starts after the Cowboys won 30-20 in Lake Charles in 2019.

“One of our messages to this team is the opportunity we have Saturday knowing that these opportunities can and have been taken away from us,” Laird said. “This game against McNeese, it’s not one that just started a decade ago.

“We’re close to 70 meetings all time. It’s an opportunity to move forward from a disappointing outcome, and we made sure to prepare ourselves to give us the best chance we can to win.”

One winning facet of NSU football this season is a dominating running game that’s averaging 243 yards through its first two games.

After redshirt freshman Aubrey Scott collected 119 rushing yards behind a bruising offensive line against Nicholls, junior Scooter Adams took his turn with 100 yards against Southeastern this past week.

“Coaches have been telling us that the run game is something we’re going to a lot in practice, and Aubrey and I have just been grinding out there,” said Adams, who transferred from Kilgore Community College. “We’re running tough and taking what the defense gives us.

Both Adams and Scott have connected in the passing game as well. Scott caught a 25-yard touchdown on a trick-play pass from receiver Gavin Landry at SLU, and Adams hauled in a 38-yarder late in the fourth quarter that set up NSU’s potential game-winning field goal.

But Laird points out the attention to detail that contributes to the running backs’ overall value.

“Everybody sees the runs of 80 and 58 yards against Nicholls, but I’ve been more impressed with their consistent tough running,” Laird said. “And it starts with the offensive line up front playing well along with tight ends and receivers blocking well.

“Scooter broke a tackle in the hole on a third-and-two that allows to score at Southeastern. Both backs are great in pass protection. It’s a credit to all of these guys on the journey that these running backs are taking.”

Junior quarterback Kaleb Fletcher took the majority of the snaps at Southeastern after alternating every two series with redshirt freshman Zach Clement.

After not having any “explosive” passing plays of more than 18 yards in the first week, NSU passers had four such plays against Southeastern.

Fletcher led the way with 96 passing yards on 7-of-15 while adding 59 rushing yards. That included leading a 99-yard touchdown drive following Stephenson’s interception on the goal line.

“(Offensive coordinator) Brad Smiley preached to our receivers and tight ends that when they have an opportunity to make a play, we need to make it, and we had guys step up,” Laird said. “We’re continuing to gain experience in the passing game, and it’s got better from Week 1 to Week 2.

“We have a lot of guys that hadn’t played for NSU before this spring season, and we’ll continue to get better with more reps.”

Three of NSU’s four forced turnovers have come on the goal line or near the end zone, a testament to the Demons’ defense “making the offense earn everything,” Laird said.