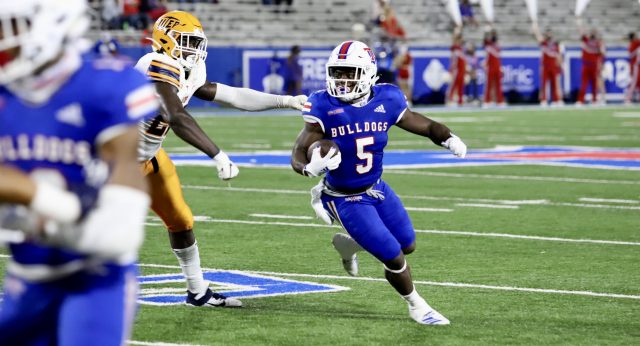 The 2021 season gets underway Saturday for five teams of area interest.

Louisiana Tech visits SEC for Mississippi State at 3, Northwestern State travels to Denton, Texas, to take on Conference-USA team North Texas at 6:30 and ULM begins the Terry Bowden era against Kentucky in Lexington at 11 a.m.

Grambling State opens its season Sunday against Tennessee State in the Black College Hall of Fame Game in Canton, Ohio, at 3.

LSU will start sophomore Max Johnson at quarterback. Johnson was expected to battle Myles Brennan for the starting job in preseason, but Brennan suffered a broken left arm early last month in a freak accident preparing for a fishing trip.

The left-handed Johnson led the Tigers to victories over Florida and Ole Miss in the final two games of last season. True freshman Garrett Nussmeier is his backup.

Kayshon Boutte, who set an SEC record with 303 yards receiving against Ole Miss, should be Johnson’s top target. The Tigers also have some talented freshman receivers.

UCLA opened its season last week with an 44-14 victory over Hawaii. The Bruins, in their fourth season under Chip Kelley, went 3-4 last season. All four losses were by six points or less.

The Bulldogs will likely be counting on several transfers this season, including quarterback Austin Kendall and running back Marcus Williams.

Mississippi State went 4-7 last season. Former Parkway star CJ Morgan returns in the defensive backfield. Like Barnett, he is taking advantage of the extra year of eligibility the NCAA awarded to players last year because of the uncertainty caused by the coronavirus pandemic.

Because of the pandemic, Northwestern State played a spring schedule. The Demons’ last game was a 49-47 victory over then-No.19 Incarnate Word the n April 10.

That was the Demons’ only win, but none of their losses were by more than 14 points. Those included a 24-16 loss to eventual national champion Sam Houston State.

North Texas is coming off a 4-6 season.

The Warhawks will look to end an 11-game losing streak against a Kentucky squad that finished 5-6 last season.

Louisiana-Lafayette went 10-1 last season and was ranked No. 15 in the final AP Top 25. Texas is coming off a 7-3 season that concluded with a 55-23 victory over Colorado in the Alamo Bowl.

Grambling State wasn’t the only area team hit hard by the coronavirus pandemic last season, but the Tigers were perhaps hit the hardest.