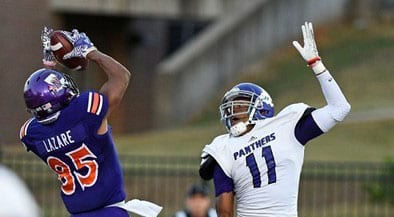 NATCHITOCHES — A balanced Northwestern State offense supported by a stout defense eventually overwhelmed Kentucky Wesleyan on Saturday as the Demons logged their first win in 49-7 fashion at Turpin Stadium.

Senior quarterback Brooks Haack completed his first 11 passes – third-best in NSU history – as he finished with 255 passing yards and three touchdowns on 22-of-26 passing.

With the NCAA Division II-member Panthers (1-5) hanging around trailing 21-7 in the third quarter, Haack’s final touchdown pass sparked three scores in a 15-minute span as the Demons (1-4) pulled away.

Junior receiver William Mafi led all Demons with 84 yards on five catches. Mafi’s second of two receiving touchdowns was a 12-yard grab to give NSU a 28-7 lead with 3:04 left in the third quarter.

“I heard Arkansas coach (Bret Bielema) talk about how his team didn’t need Supermans or Batmans to play Alabama, so I used that at halftime tonight,” said NSU coach Jay Thomas, who added that his team pressed at times. “We hung with that until we got a little sloppy late, but it’s great to see the smiles on these guys’ faces.

“They put so much time into this, working 365 days a year. This win kind of takes the pressure off.”

Haack credited the offensive line and his receivers, saying the Demons emphasized third-down conversion and red zone offense during the bye week. NSU converted on 7-of-10 third downs and 6-of-7 red zone chances.

“It’s really a testament to the kind of offense we can be when we don’t hurt ourselves and make plays,” Haack said. “I feel a lot more comfortable at this point in the season, and it’s slowing down for me again.”
Haack threw first-half touchdowns to Mafi (31 yards) and junior Cameron Lazare (six yards) to take a 21-0 lead by the 13:06 mark in the second quarter.

Senior running back De’Mard Llorens, who returned to action after recovering from a shoulder injury, added two second-half rushing touchdowns of eight and 13 yards.

“I was sad that I hurt my shoulder, but I overcame it and it felt good to be back,” said Llorens, who rushed for 29 yards as the Demons piled up 210 rushing yards. “This win is a confidence booster, and it’s what we needed to go back into conference play.”

The Demons tallied seven tackles for loss by seven different players, led by two tackles for loss by Koby Welch. Lyn Clark had the Demons only sack and led NSU with five tackles along with Nicholas Forde.
Forde forced a fumble (recovered by Austin Balthazor) for the game’s only turnover.

Kentucky Wesleyan quarterback DaMarcus Smith, a North Texas transfer, threw for 179 yards on 16-of-29 passing to lead the Panthers’ attack.

The Demons return to action next Saturday at Lamar (2-3) in a 6 p.m. kickoff.