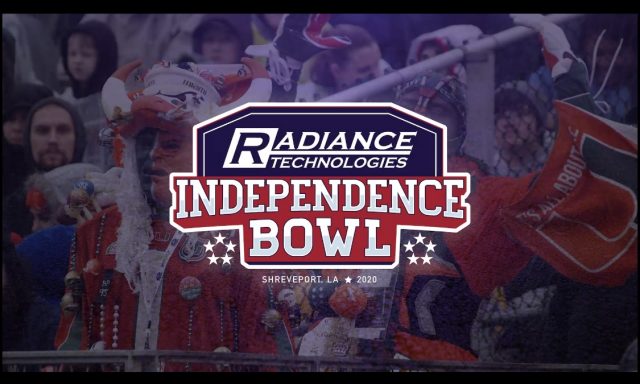 The BYU Cougars and UAB Blazers face off Saturday in the 45th Radiance Technologies Independence Bowl.

Kickoff is at 2:30 p.m. at Independence Stadium. The game will be broadcast on ABC.

The Cougars and the the Blazers have been here since Tuesday going through practices and enjoying activities associated with the event.

During a Friday morning press conference, UAB Head Coach Bill Clark and BYU Head Coach Kalani Sitake praised the hospitality that they, their assistant coaches, players and support staff have received since arriving.

“Once again we want to thank Radiance Technologies Independence Bowl for having us,” Clark said. “What a great experience that we’ve had all the way back to Tuesday when we arrived. The hospitality has just been unbelievable. We had heard a lot of great things about the bowl here, but it has exceeded our expectations. It is obviously important to this community.”

Said Sitake: “Just wanted to express our appreciation to everyone who has shown us such great hospitality here, to the sponsor Radiance Technologies and the Independence Bowl committee. So much energy and effort goes into taking care of us from the people here in Shreveport. We feel it, and are really excited for the opportunity to play in this game. The amount of love and effort, we feel it. The people here are amazing in getting to know everybody. The different events we’ve had all week have been amazing for our players.”

BYU and UAB are both making their first appearances in the game.

The Cougars, an independent team, are 10-2. The Blazers finished 8-4 overall and 6-2 in Conference USA.

BYU began the season with five straight wins, including a 26-17 victory over eventual Pac-12 champion Utah in Week 2.

The Cougars then lost to Boise State 26-17 and eventual Big 12 champion Baylor 38-24 before finishing with five straight wins. BYU defeated USC 35-31 in its regular-season finale on Nov. 27.

BYU was ranked No. 12 in the final AP Top 25 and No. 14 in the USA Today Sports AFCA Coaches Poll. The Cougars were No. 13 in the final College Football Playoff rankings.

During the Friday press conference, Sitake said the fact that the Cougars are ranked and the Blazers are not isn’t something he’s thought about.

“We’re not really concerned with that stuff,” he said. “To be honest with you, nobody thought we’d be ranked in the preseason. So, we have our goals we’ve established as a program back in January when we lost a lot of production to the NFL and all those guys who didn’t come back, people were questioning whether we’d be able to replace a lot of those players.

“I think it was a challenge for our team, our program and our coaches, but guys stepped up. So, being focused on what we’re trying to accomplish is more important than anything else. I have a lot of respect for UAB and how hungry they are.”

“We’re extremely hungry,” he said. “You know that is probably the number one thing when it comes to bowl prep that people talk about is that whoever is the most motivated wins this game. That is one thing that all throughout this bowl prep I feel like practices have been more competitive than they have been all season, you know we have been getting chippy with each other and getting in fights because everyone is competitive and everyone is hungry to play another game, so it’s just another opportunity to go have some fun.”

Clark said his team knows the Cougars will provide a big challenge.

Clark is well aware of the history and tradition of BYU. He said that would make a victory even more special.

“I think any bowl win is big,” he said. “But this is one of those programs that you grow up watching. You watch them in big games. You watch their history. I know that’s important to them. There’s a big tradition there. We were talking about traditions we’ve started at our place. (Offensive lineman) Colby (Ragland) was alluding to the past and maybe not winning as much until he gets here and then it’s expected. We expect to win. They expect to win. So obviously being a history buff, especially a college history buff, about their program it would mean a lot obviously.”

UAB started 3-2 then won five of its last seven. The Blazers closed the regular season with a 42-25 victory over UTEP on Nov. 26.

Jaren Hall has completed 189 of 296 passes for 2,583 yards and 20 touchdowns with five interceptions.

Tyler Allgeir leads the Cougars on the ground with 1,409 yards on 249 carries. He has scored 20 touchdowns.

Dylan Hopkins has completed 136 of 212 passes for 2.085 yards and 15 touchdowns with six interceptions.

DeWayne McBride, a second-team All-Conference USA selection, is the Blazers’ leading rusher with 1,188 yards on 176 carries. He has scored 12 touchdowns.