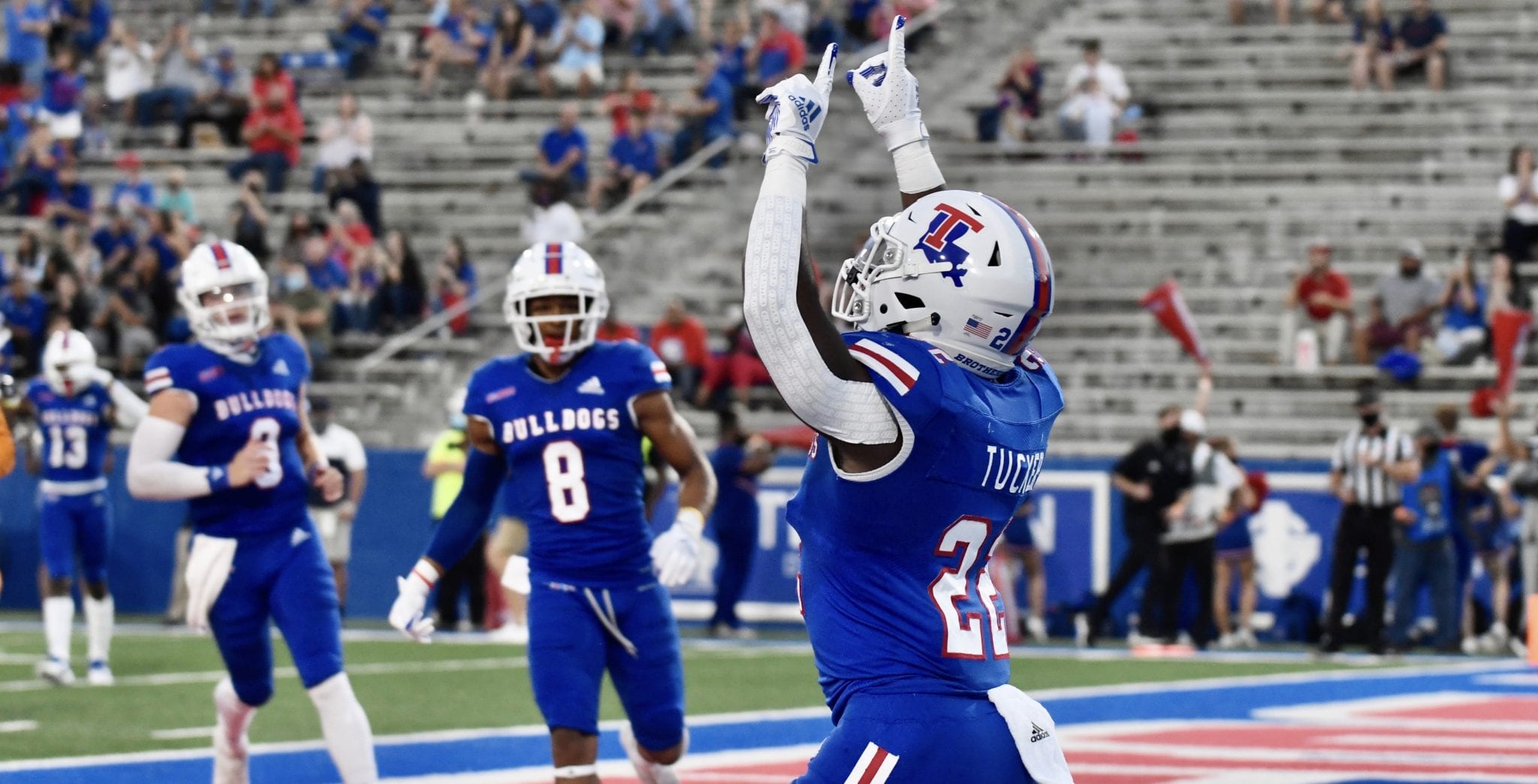 RUSTON — One week after a disappointing effort in a road loss at BYU, the Louisiana Tech defense made play after play down the stretch to give the Bulldogs a hard-fought 21-17 Conference USA victory over UTEP Saturday night at Joe Aillet Stadium.

It was a night that head coach Skip Holtz and Co. needed it.

The Bulldogs offense managed just 210 yards of total offense in a contest that saw the Miners (3-2, 0-1) record 13 tackles for loss and four sacks against a depleted LA Tech offensive line.

Even the Bulldogs special teams struggled, including surrendering a 100-yard kickoff return for a TD early in the fourth quarter when it appeared Tech had control of the game with a 11-point lead following the second rushing TD of the night by Israel Tucker.

It wasn’t a pretty win. But it was a win – the eighth straight in the series against the Miners.

“It’s not always pretty, it certainly was not pretty tonight, but these guys just keep competing and find a way to win,” said Holtz. “I’m really proud of them for the way they hung in there and the grit that they showed and the way that they continued to compete.

“We really struggled protecting our quarterback and getting the ball off, but I thought our defense stepped up and played a great game in the second half. I’m really proud of how Ezekiel Barnett and Trey Baldwin and Tyler Grubbs. Those guys are always around the ball. Everybody was able to stay positive.”

Tech appeared to be poised for an impressive offensive night. The Bulldogs took the opening kickoff and drove 75 yards on 10 plays to take the early lead on a 15-yard run by Tucker. Jacob Barnes extra point made the score 7-0 with 11:23 to play in the opening quarter.

The next 60 offensive plays of the night totaled just 135 yards. UTEP’s defense took advantage of LA Tech being without starting tackles Donavaughn Campbell and Antawn Lewis, who were lost on Friday due to Covid19-related concerns.

Quarterback’s Luke Anthony and Aaron Allen were both under constant pressure all night, combining to complete just 14 of 28 passes for 119 yards. And on the ground, the Bulldogs managed just 2.2 yards per tote.

UTEP tied the game early in the second quarter on a 33-yard TD pass from Gavin Hardison to Devaughn Cooper. However, it would the only TD that the Bulldogs defense would surrender in the game.

Tech retook the lead late in the first half, when Justin Henderson took a handoff, made three UTEP players miss and outraced the Miners defenders to the pylon for a 14-7 advantage. The Miners cut the deficit to 14-10 on a 29-yard field goal by Gavin Baechle with 9:02 to play in the third quarter.

“They’re a very good defense, and we had two starters missing on the offensive line, but it is next man up,” said Tucker. “We’ve got to fix those mistakes and do better.”

However, the momentum was short-lived when Duron Lowe took the ensuing kickoff and raced untouched 100 yards for a score.

UTEP had three more opportunities to take the lead in the fourth quarter, but managed just 22 yards on 11 offensive plays as the Bulldog defense stood tall.

“It was more of a disguise of what we were bringing out in our game plan,” said Trey Baldwin, who finished with a team-high 10 tackles. “They had a good offensive line, so hats off to those guys. We just had to disguise it more, and it started paying off after a while.”

Freshman Cedric Woods came up with two huge defensive plays in the final quarter. The first was a break up of what appeared to be a long TD pass when he recovered from getting beat off the line. Woods then added his first career interception on another long pass play with 6:00 minutes remaining in the game.

“It was great play by him breaking it up,” said Holtz. “I was a little flustered that the guy was behind us, and I’m a little thankful that the ball was underthrown, but I thought he made a great play on it by catching up and batting the ball away. That was a huge play in the game.

“And then the interception near the end of the game, I believe we only had one turnover tonight and it just happened to be the true freshman. I was certainly grateful that Cedric was able to come up with the play he did there at the end of the game.”

The Bulldogs return to action Saturday when they host Marshall at 5 p.m.