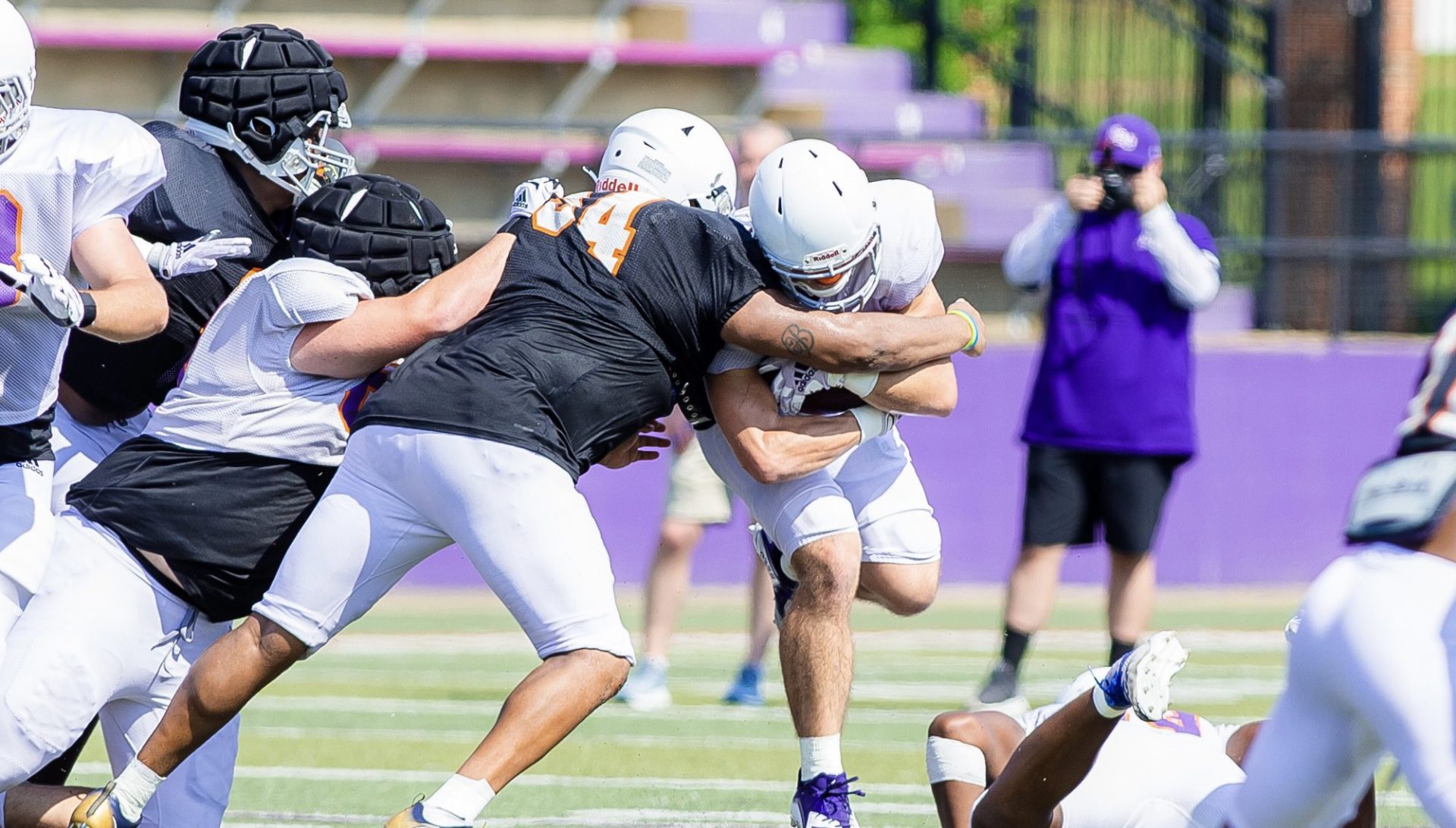 NATCHITOCHES – There was little that was comfortable about Saturday morning at Turpin Stadium during Northwestern State’s first scrimmage of fall camp.

One Demon who has found comfort – and showed as much – was defensive lineman Isaiah Longino.

A junior from Humble, Texas, Longino typified a Purple Swarm defense that recovered from a self-described slow start to buzz and flow as their nickname suggests during the 80-play intrasquad scrimmage under a broiling, nearly cloudless sky.

“I was just trying to make plays and boost my team,” said Longino, who finished with two sacks, a tackle for loss and a quarterback hurry. “We came out a little flat. We’re a player-led team, and as leaders, we take pride in juicing up the team, especially the defense.”

After Zachary Clement capped the first drive of the scrimmage with a 28-yard touchdown pass to LC Greenwood, the Demon defense began to wrest momentum to its side.

Following Clement’s touchdown pass, which came on Saturday’s eighth snap, the Purple Swarm allowed just three more plays of double-figure yardage – none that covered more than 19 yards. Equally as important, the defense collected a Cedric Anderson interception in the first two-minute drill of camp and consistently found ways to keep the offense from extending drives.

“There were bright spots, no doubt,” fourth-year head coach Brad Laird said. “It was practice No. 7, not our 25th practice. That’s a positive. There are things we’ll learn from this film. We’ve got to make improvements in all three phases.

“Defensively, being able to get off the field on third down was key. In the red zone, the defense was two of three in not giving up points. We had the first two-minute situation we’ve had this fall camp. We weren’t able to get one in earlier because of a missed practice. There was a real heady play by Cedric Anderson in the two-minute drill after the interception. He did the smart thing and got down.”

While Clement tossed the scoring pass to Greenwood, Kaleb Fletcher propelled the offense down the field for most of the drive.

Fletcher connected on three of his first four passes, including a 37-yard catch and run by tight end Jacob Logan and a leaping 18-yard grab by Scooter Adams, who wrestled the ball away from a defender. Three plays after Adams’ catch, Clement dropped a touchdown pass to Greenwood in the middle of the end zone, arcing it in over top of the defense.

“We did a lot of good things, but we have a lot to work on as well,” said Clement, who finished 6-for-12 for 87 yards and a touchdown. “You always have room to improve. We’re going to improve on the things we did well (Saturday) and get better at the things we didn’t do well.”

To a man, Laird and Longino echoed Clement’s thoughts on improvement.

For Longino, who moved from linebacker to the defensive line ahead of the six-game spring season that ended April 10, his learning curve has accelerated.

“I feel extremely comfortable at D-line,” he said. “That’s the biggest progression. I feel like I know what I’m doing. I feel like I can make plays. Coach (Kevon) Beck(with) emphasizes shoulders and pass rush a lot. That’s helped me tremendously. The teachings he’s given me, that’s why I was able to come up with those sacks today. That’s the biggest improvement for me.”

Monday marks the next chance for Laird and his staff to see that improvement when the Demons return to practice at 2:15 p.m.

“We’ll go back and watch the film, and I think we’ll see (mental carryover) with particular individuals,” Laird said. “Those individuals who have been consistent from day one through six made it easy to transition to a preseason game. Those who have been inconsistent in meetings and with their mental reps and inconsistent in walkthroughs, you see it on the field. We have to be better in those 11-on-11 situations mentally. That’s 100 percent on me. We have to be better when we get to practice eight on Monday.”