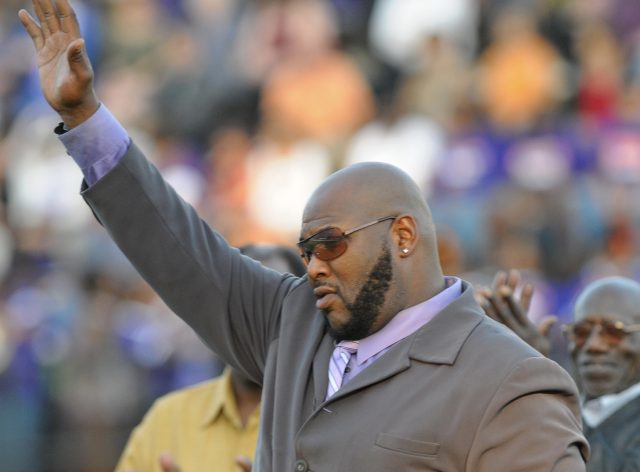 NATCHITOCHES – Marcus Spears waited for more than a quarter century to have his Northwestern State football No. 76 retired.

After the COVID-19 pandemic forced the two-time All-American to stretch that time a little more, Spears will have his moment in the sun Oct. 23 when the Demons host Southeastern in NSU’s annual Homecoming game. That date is a little more than a year after the initial Oct. 17, 2020, date NSU hoped to honor Spears.

Northwestern State Director of Athletics Greg Burke informed Spears of his pending number retirement in June 2020, but the COVID-19 pandemic shuttered NSU athletics until November 2020, and Spears was given the option to have his ceremony held during the six-game spring football season but chose to wait until the fall.

“It was so unbelievable and so surreal that Northwestern would retire my number, and I still can’t believe it,” Spears said. “There have been five jerseys retired and to be the next is something I can’t really explain.”

A 6-foot-4, 320-pounder from Baton Rouge, Spears earned All-American honors in 1992 and 1993, becoming just the second FCS-level player to make the Football Writers Association All-American Team with his 1993 selection. He was one of 10 semifinalists for the Outland Trophy, presented to the nation’s best lineman, and is believed to be the lone FCS player to achieve that honor.

A three-time All-Southland Conference selection and All-Louisiana honoree, Spears was drafted in the second round (39th overall) by the Chicago Bears. He spent three seasons with Chicago before playing the bulk of his career for the Kansas City Chiefs from 1997-2003. Spears concluded his NFL career with a one-season stop in Houston in 2004.

A 2011 N-Club Hall of Fame inductee, Spears has remained close to Northwestern State since concluding his career.

“This penultimate recognition of Marcus’ NSU career is appropriate as he was one of the most imposing and skilled offensive linemen to ever play at the FCS level,” said Burke, who recalled Spears being in Auburn Hills, Michigan, in 2006 for NSU’s first-round upset of Iowa in the NCAA Men’s Basketball Tournament as being an example of the pride he has always had for his alma mater.

“The caliber of his play in the trenches as a collegian was further illustrated by his lengthy tenure in the NFL. He played with passion and has lived his life in like fashion. All of us at NSU are grateful for his undying ‘Demon passion’ and congratulate him on this well-deserved honor.”

Spears made several trips from Houston to Natchitoches in the fall of 2020, partnering with the Central Louisiana Food Bank to provide food for those affected by Hurricanes Laura and Delta. Spears’ initial giveaway assisted 322 families in central Louisiana.

“That was an unbelievable experience, not just for myself,” Spears said. “We were able to show the younger athletes on campus we have a responsibility to serve the community and to come back and do our part. We helped a lot of people out, and I’m glad I had the opportunity to get that done.”