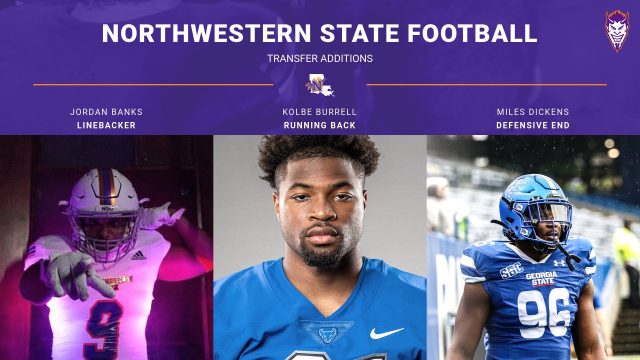 Head coach Brad Laird welcomed linebacker Jordan Banks, defensive end/edge Miles Dickens and running back Kolbe Burrell into the fold for the Demons, whose first spring practice was moved by weather from Tuesday to Wednesday afternoon.

“We had the opportunity to add three players with prior experience at the college level, and those players will help us continue to fill holes as we prepare for the 2022 season,” said head coach Brad Laird, whose fifth season at the helm of his alma mater begins Sept. 4 at Montana.

“Jordan Banks comes from an Arizona State program where he gained a great deal of knowledge from a staff with NFL ties, Miles Dickens was part of an emerging program at Georgia State, and Kolbe Burrell was in a similar situation at Buffalo. All three of those young men will help make us a better team in 2022.”

With the Sun Devils, Banks appeared in three games as a true freshman in 2020, recording three tackles and intercepting a pass against Arizona.

A five-star recruit out of Narbonne High School in Los Angeles, Banks was the No. 8 inside linebacker prospect nationally in his recruiting class and was the No. 17 recruit in California. In his final two seasons at Narbonne, Banks recorded 128 tackles (30 for loss) and 15 sacks in 20 games.

A 6-3, 247-pounder, Dickens was a three-sport standout in high school, playing football and basketball and running track and field at Deerfield Beach High School and Stoneman Douglas High School in south Florida.

Dickens was a 247Sports.com composite three-star recruit after helping lead Deerfield Beach to a 13-2 mark as a senior and a berth in the Class 8A semifinals. As a junior, Dickens produced 15 tackles for loss, 13 quarterback hurries, nine sacks and two pass deflections. He clocked a 22.4 200 meters as a 230-pound sophomore track athlete.

Burrell spent two seasons at Buffalo before coming to NSU.

Burrell, a four-year letterman, rushed for 3,273 yards and 44 touchdowns and was the Offensive Player of the Game in the 2019 Pennsylvania Class 6A state championship game, rushing for 190 yards in the Hawks’ title-game win.