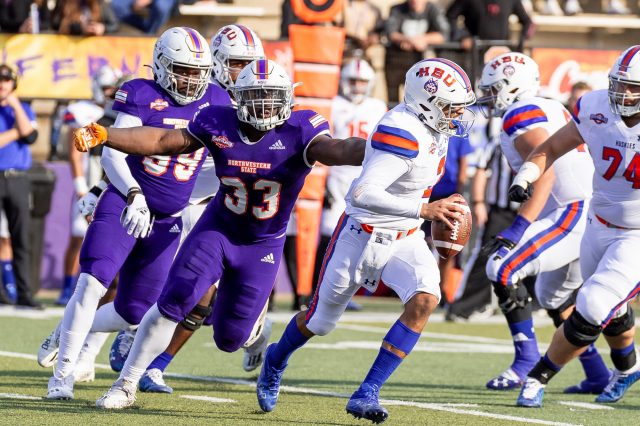 HAMMOND – The Northwestern State football team got exactly what it needed in its Nov. 6 home finale against Houston Baptist – a win.

As the Demons kick off a two-game, season-ending road trip Saturday night at No. 13/14 Southeastern, they do so armed with one of the most important intangibles a team can carry with it.

“It was a good win, and it gave us some confidence,” senior linebacker Kyle Moore said of NSU’s 28-24 win against Houston Baptist. “That’s what we needed.”

Northwestern State (2-7, 2-4) will take that confidence into its second Southland Conference meeting of the season with the Lions (7-2, 5-1) in a 6:05 p.m. kickoff at Strawberry Stadium. The game can be seen on ESPN+ and can be heard on the Demon Sports Network, flagshipped by 94.9 FM The River in Natchitoches. Free streaming audio also is available on www.NSUDemons.com and through the Northwestern State Athletics mobile app, which can be downloaded free for Apple and Android devices.

“I have to say this, 100 percent credit to the players for that win,” fourth-year head coach Brad Laird said. “They kept plugging, kept fighting. It was 17-0 with about 12 minutes to go in the second quarter, and they had 193 total yards and we had minus-1. Our kids just kept fighting.”

Saturday’s matchup with Southeastern marks the back end of a home-and-home season series with the Lions, one of three teams the Demons have or will face twice this season. By virtue of its win this past Saturday, NSU secured a season sweep of Houston Baptist.

The Demons and Huskies went four weeks without facing each other while NSU fell to Southeastern, 51-14, three weeks ago on Oct. 23.

“At the end of the day, you know schematically, a lot of things will stay the same,” Laird said. “You know the personnel. The next two weeks, playing teams twice – from a personnel standpoint – we’ve seen them up close and personal. You know what to expect. It’s still the Southland Conference. There’s still a chance to win every time you step on the field.”

For the third time since that first SLU meeting on Oct. 23, the Demons will face an offense that ranks in the top four nationally in terms of yards per game. SLU enters Saturday’s rematch averaging an FCS-best 576.3 yards per game, using an offense triggered by reigning Walter Payton Award winner Cole Kelley.

Kelley accounted for 414 total yards and four touchdowns in the first meeting, but the Demons were able to sack him twice, including one by defensive end Isaiah Longino, who has recorded a sack in each of his past four games.

“The stats don’t always show up, but what he’s continued to do is be a leader,” Laird said of Longino. “When we were down 17-0, he continued to keep every one up. Things like that don’t show up on the stat sheet but they have an impact on winning. He brings that about.”