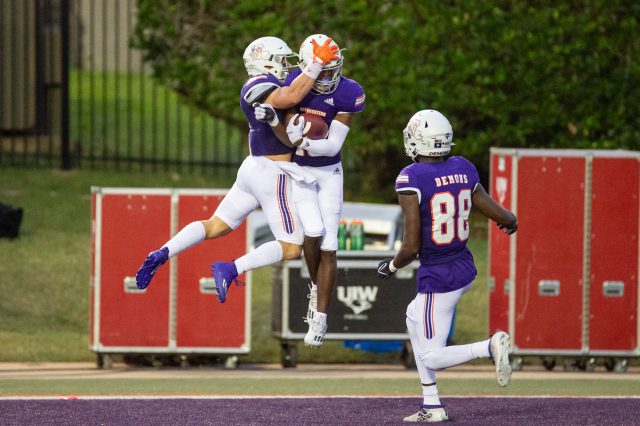 LAKE CHARLES – In the new-look Southland Conference, there is no team that is more of a rival for Northwestern State than McNeese.

Factor in a third meeting between the teams in 245 days and there is little doubt the Demons and Cowboys embody the definition of rivals. The longtime combatants meet in a 12:05 p.m. Saturday matchup in Lake Charles for the third time since March 20, concluding the 2021 season for both teams.

The game can be seen on ESPN3 and can be heard on the Demon Sports Network, flagshipped by 94.9 FM The River in Natchitoches. Free streaming audio is available on www.NSUDemons.com or through the Northwestern State Athletics mobile app, which can be downloaded free for both Apple and Android devices.

“When you consider what rivals are, they are one,” fourth-year head coach Brad Laird said. “The history between us goes back a long way. We look forward to the opportunity to play them again, especially after the way the first game went.”

In the first meeting with McNeese, 14 of NSU’s 17 points came after intermission.

“It’s going to be important,” Laird said. “Any time you’re on the road – much less in the Southland Conference – you have to start fast. We haven’t been able to do that. We have to find a way to start fast and get ourselves to the fourth quarter and have a chance.”

Scoring against McNeese does not come easily.

In a Southland Conference that features several high-powered offenses, the Cowboys’ defense ranks in the top 50 nationally in scoring defense (47th, 25.0 ppg).

“They’ve gotten better this year,” Laird said. “Defensively, they lead the conference in scoring defense, and they have 28 sacks. Offensively, (quarterback) Cody Orgeron, he’s been there a while and had success. It’s Senior Day for them. There are a lot of guys who have played together or against our guys in high school. There are some guys on the other side we’ve competed against not just in college.”

“It’s easy to tell in practice those who have mentally stayed with it,” Laird said. “Those are the guys who understand about going through those tough times and seeing the other side of that. You appreciate those guys. It hasn’t been easy. This group has been down and continued to fight and play hard and find ways to make plays. We want to carry that over and finish on a good note Saturday.”